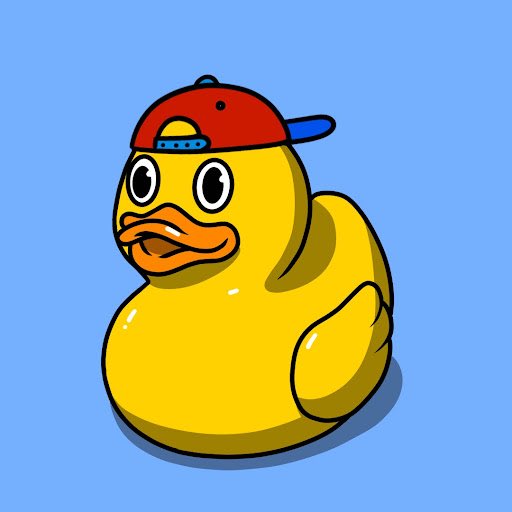 5K, 2K for the holders of genesis, 3K for Public Mint

0.2 ETH for holders and public

The RubberDuckz project initially launched on Jan 20, 2022, as a collection of 2,000 hand-illustrated 2D duck NFTs known as the ‘Rubber Duckz’. The RubberDuckz initiative first began as a collaborative effort between ‘PapaDuck’ & Trey Ratcliff (Proof member and Duck holder), mostly directed to their Proof Collective friends as a token of their friendship. The RubberDuckz team has been clear to their community that there will be no utility or extra perks associated with owning a RubberDuckz NFT other than holders getting an Allowlist spot for the BYORD (RubberDuckz Phase 2), their new collection of 5,000 Duckz with an additional 300+ new traits in addition to new rarities.

This BYORD collection will have its own separate utility.

The story of the RubberDuckz begins with Dani’s mother, Alice, who was a founding partner and VP of Patient Services at Best Doctors in Boston. Alice was in charge of helping connect patients with the best doctors available regardless of their economic circumstances.

Alice came across a yellow rubber duck at a store one day and bought it for her son to use as his companion during his baths. Soon she realized that one rubber duck wasn’t enough, and the yellow duck needed some friends of his own. Alice began to grow her collection of rubber ducks and even gifted unique ducks as her token of appreciation. Even the patients Alice had helped realized her affection for rubber ducks, and before she knew it, she had become an avid collector with an incredible collection of rubber ducks.

Sadly, Alice fought her battle against Pulmonary Fibrosis and eventually succumbed to the disease. One day, during a conversation between PapaDuck and MagicMan about her beautiful life, the topic surrounding Alice’s Rubber Ducks collection came up, and the idea of making these rubber ducks available for everyone to enjoy was created. In addition to having ducks available for anyone who wanted a companion of their own, PapaDuck and MagicMan decided to give a chunk of their proceeds to the Boston Children’s Hospital (where Alice met and cared for many wonderful patients). Another chunk of their proceeds will go towards helping people in the Dominican Republic who are in need of treatment for Pancreatic Cancer (the same disease responsible for Alice’s passing).

The Rubber Duckz collection was created for the purpose of creating a community of values and purpose that is worthy of bearing the memory of Alice and her courageous efforts.

“This is the Official NFT Rubber Ducks collection. Inspired by a heroine, conceptualized by a dreamer, and executed by a team of real, passionate, and professional people. WELCOME TO THE FLOCK. KEEP QUACKING.”

In short, owning a Rubber Duckz Genesis will allow all holders the option to claim a free mint into the BYORD project for just the cost of gas. In addition, all BYORD NFTs will grant a free mint of VOXEL AVATARS that will be claimable on the Sandbox Metaverse in the future. All Rubber Duckz holders will also receive access to private members-only channels on their Discord server.

The Rubber Duckz team has chosen to remain undoxxed. The only information that we have surrounding their identities is the information found on their Twitter profile, Discord FAQ, and official website. In their own words, the team behind Rubber Duckz consists of marketers, ad-men, illustrators, digital designers, developers, and crypto and NFT enthusiasts that have been in this space since 2017. According to their official website, the team is adamant that they have all the connections and resources necessary to make their project a success. Still, there is no additional public information available at this time.

The community of Rubber Duckz feels entirely organic with little to no spam. There is mostly friendly conversation and genuine questions from community members wanting to get involved with the PROOF Collective and Moonbirds ecosystem. Many holders are proud to hold and flaunt their Duckz, with some holders holding as many as 26 Rubber Duckz NFTs.

One important point to make is the fact that Rubber Duckz market itself as a team consisting of marketers and ad-men, but its Twitter page currently has only 9,988 followers, and its posts show only moderate levels of likes and engagement. It could be that the Rubber Duckz didn’t truly begin their marketing efforts as of yet, and they are waiting for an opportune moment to do so, but this is purely based on speculation at the time of writing.

Since then, there have been no other publicized collaborations, but many collectors and NFT influencers have engaged with, and are shilling the Rubber Duckz NFT project. Many PROOF Collective holders own a Rubber Duckz, and from this association alone, the Rubber Duckz has started to garner a lot of attention.

There has been a lot of volume for the Rubber Duckz Collection in recent weeks resulting in a lot of volatility. Those who got in early saw huge gains, but many bought Rubber Duckz at the top and are currently waiting for another pump. When there is a significant increase in volume traded on OpenSea, investors need to be careful and aware of the associated risks of volatility.

The Rubber Duckz team is publicly undoxxed, presenting more potential risk for investors. If a team remains undoxxed, there is less accountability, and a higher likelihood that a project will not be around to fully deliver on its roadmaps as the option to disappear without a trace becomes a potential option. So far, the Rubber Duckz team has successfully delivered on their promises and followed through on their roadmap, but this is no guarantee for future results.

BREAKING: Yuga labs has filed a lawsuit against the responsible parties behind the recent “slanderous claims” towar… https://t.co/LHpODgXvxK

We live in a society https://t.co/OvfUZ22X8Z

Are free mints still the meta