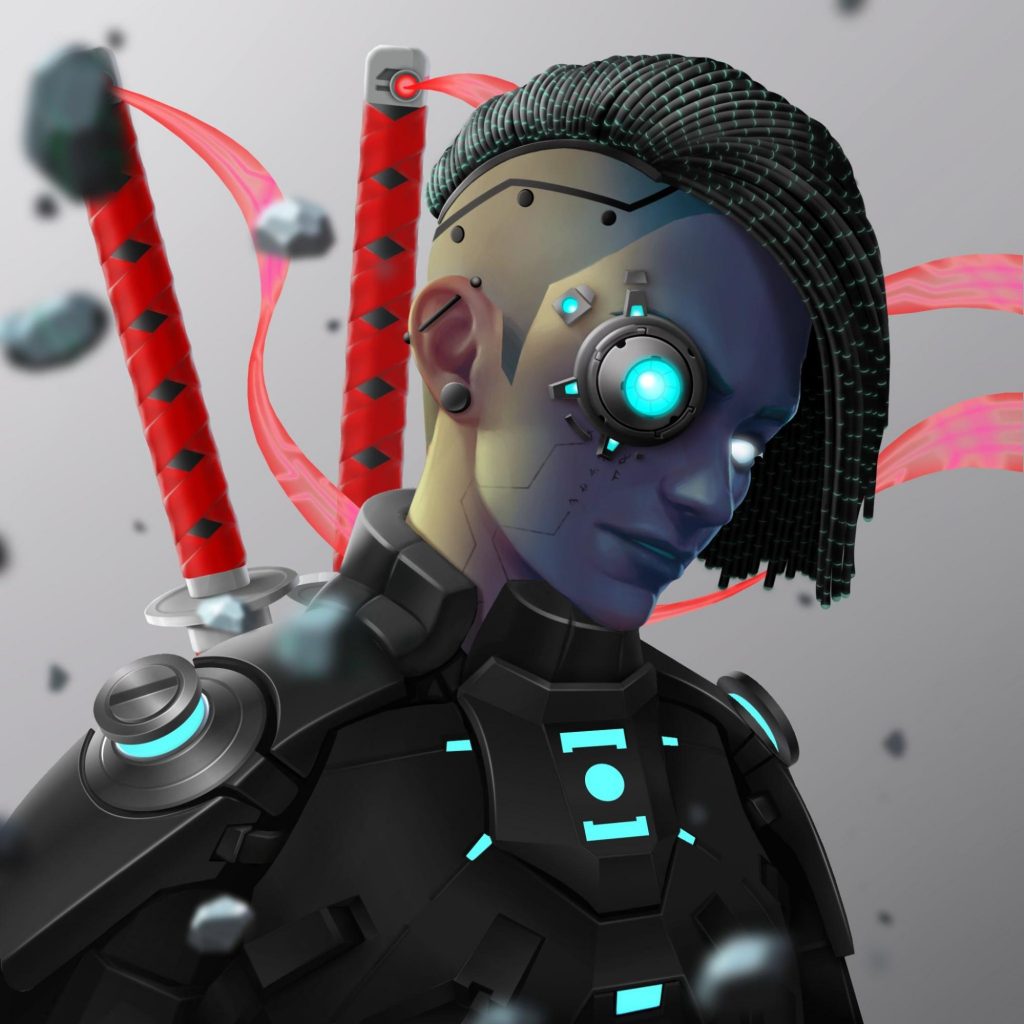 MetaVolution is an upcoming P2E on-chain game, where gamers will have real ownership of the assets on the Ethereum network. MetaVolution consists of 8,778 NFTs, in game these NFTs will be referred to as “Immortals”, It will combine industry leading art, game lore, and progression to make it both profitable and fun for players. The game will feature day 1 utility with staking available via the in-game currency, Metropy ($TROPY). $TROPY will be used to purchase lands and obelisks, as well as grant access to quests and more. Holders will be allowed to withdraw $TROPY with a burn fee of 25% to withdrawals. Much like many games we see in this day and age, it will be played in seasons with new features and benefits added throughout each one. As of now, we don’t have a clear idea on how the game will play, although some core components have been revealed such as strategy, risk and reward, loot and bosses, including a final boss fight. More information on gameplay is promised as season one kicks off.

In the distant future, 2119 to be exact, terrorists are days away from unleashing a deadly virus capable of mass extinction. In preparation for this event, “The Immortals”, a secret organization, had been researching something they call “The Ark”. The ark is a portal to a parallel universe that would grant immortality to those who entered. What we know now is that this universe is in fact, The Metaverse. Of the millions of inhabitants that wished to cross over, only 8,778 were allowed to enter the portal and to do so, had to go through a drastic process called “MetaVolution”.  Pushing their bodies past a state of humanity,  although keeping their personalities, memories and physical appearance, these evolved beings would be referred to as “Immortals”.

The vision of the project is to create a simple but in depth game that will introduce more gamers into the P2E space. Much like other popular and free to play games, MetaVolution wants to be a game to be played on a daily basis.

MetaVolution differentiates itself from other projects by introducing day 1 utilities. Heavy levels of investment have already been implemented into the project to ensure everything is ready to go before mint. By holding a token, gamers will have access to:

At reveal, holders will be able to stake their tokens for $TROPY which can be spent within the games’ ecosystem. The amount generated daily will be dependent on the rarity of the NFT held.

An in game collectable with its very own token and mintable on day 1. There will be a supply of 20,000 total and will be split into 4 types – Water, Fire, Earth, Air. Upon owning all 4 elements, gamers will be allowed to mint their own land.

Land can be earned by owning then burning the 4 different Obelisk types alongside paying 1,000 $TROPY, and is fundamental to game progress. Once land is owned, large amounts of in-game currency can be earned on a daily basis. There will be a total of 5,000 land available to mint.

The world’s largest, virtual NFT event will be hosted by MetaVolution in July and currently more than 20,000 NFT lovers are expected to attend. Token holders will be granted a MetaVolution Fam Pass, allowing VIP and lifetime access to all conferences for as long as the NFT is held. Holders will also get exclusive access to analytics software built by the team and have the opportunity to meet the team and hear from founders of other top on-chain games.

A marketplace for holders to use their $TROPY to trade, win WL, airdrops and get discounts on MetaVolution merch. More information on the marketplace is due to come soon.

All holders will be given full ownership of the IP rights allowing them freely use the artwork as they wish.

From developers and designers who have worked on games such as Fortnite, Star Wars, EA published games and more studios.

Approaching launch, the team has only revealed the roadmap to include season 1. Information on future seasons is promised prior to launch in order to keep the community excited and engaged.  The current roadmap is as follows:

MetaVolution boasts a fully doxxed team consisting of members who have built and scaled 9 figure companies alongside designers who have worked on AAA games for world renowned publishers. Unfortunately, very few social links are available for the team.

Sam is a lifelong gamer and began his entrepreneurial career after developing bots to farm gold in Diablo III before moving onto buying Riot Points and Skins in League of Legends. He made his fortune by scaling a gaming peripheral company to over $100m and is now fully committed to the MetaVolution project.

Terry is a serial entrepreneur, having founded and scaled many companies beyond the 9 figure mark. Previously serving in the military, he has also had experience in the world of angel investing, giving him stakes in a multitude of companies. His next objective is to turn MetaVolution into a global brand.

Lifelong best friend to founder Sam, Fred left school at the age of 11 to earn a full time living playing and trading in the game, Diablo II. He has always taken pride in the fact that he’s been able to make more money through his passion for gaming than working a ‘normal job’. Fred has taken on the responsibility of leading the marketing charge for MetaVolution.

With over 14 years of software development, Joel is an expert in turning ideas into reality. Running the USA based dev team, Joel is responsible for MetaVolution development tasks.

Leading the in-house creative team at MetaVolution, Austin has a rich history playing video games. Starting with Donkey Kong on the N64, he’s gamed through all generations since, crossing paths with the likes of World of Warcraft, Halo and the recent juggernaut, Elden Ring.

Scrolling through the Twitter feed, there are a number of collaborations between MetaVolution and other projects, some of which being significant names in the space. Most notable, is a giveaway with Phantom Network, who’s current project, PXN Ghost Division is ranked 3rd on OpenSea via trade volume. Furthermore, MetaVolution has combined with the Citizens of Neo Tokyo, the well known project from internet millionaire Alex Becker for an AMA back in April. Although the number of P2E games that have taken the world by storm are few and far between, associating itself with some of the biggest players in the space will only be of benefit to MetaVolution. With many investors and traders looking at associations as a factor when researching upcoming projects, the team at MetaVolution have done a great job aligning themselves with successful, established names in the market.

Looking through the social channels belonging to MetaVolution, they seem to be taking a natural and organic marketing approach. Following the trend that we are seeing on a more regular basis, it is avoiding FOMO to generate artificial hype as well as distancing themselves from the excessive grind forced upon many communities. While they are generous with WL giveaways, they tend to be awarded either through collaborations or via raffles entered by engagement or retweeting. As we approach mint, MetaVolution currently has a respectable 86.2K followers on Twitter.

In regards to Discord, the community consists of 13,439 members. The server seems to be an active space with consistent pings of new notifications and messages during our time browsing which suggests a well engaged community. The team also provides regular updates via announcements and videos frequently to ensure that community members aren’t without information for extended periods. With time, the project will hope that more members flood in. As the project is just a number of days away from mint, the community, whilst active, is the lower end of the scale in terms of numbers.

Gaming has now surpassed all other entertainment industries to become the largest across the world, generating over $180 billion over the course of 2021. With the sector now reaching a period of genuine mass adoption, there is literally 0% chance of things slowing down. While it’s still early days when it comes to P2E, Web3 and NFTs, we’ve seen many game devs and publishers benefit from being first, or early to the space. Fortnite springs to mind for the battle royale genre and From Software for creating the ‘Soulsborne’ style of games which has spawned hundreds of copycats. MetaVolution is no doubt still early in the space and with it comes the opportunity to become a well established name as the early adopters move in and pave way for the rest.

While it remains to be seen what the gameplay MetaVolution will consist of, the team behind it are all veterans who have prior experience in AAA standard games including the aforementioned Fortnite. With this comes the knowledge on how to create a satisfying gameplay loop that will keep gamers engaged, thus remaining in the ecosystem. The dawn of Web3 will allow genuine ownership of assets and the upcoming marketplace will provide a space where items can be traded and sold for currency. The likes of Axie Infinity, Decentraland and The Sandbox has opened the door for P2E games becoming a genuine path to real world wealth, so with the right approach and an addictive gameplay loop, MetaVolution seem to have the foundations in place to join them in the P2E pantheon.

The infancy of Web3 and the NFT market is both a blessing and a curse. As opposed to the above, where getting in early could be seen as an entry into a yet to be saturated space, it can also be argued that without mass adoption, the user base is just not there to capitalize on. The general population will not understand the concept of P2E mechanics and the idea of having to ‘buy into’ a game will be alien to the majority who stick to their consoles or play on Steam. You could have the greatest product ever, but if the world is not ready, then it won’t succeed regardless.

Additionally, while it’s brilliant that utility will be available from day 1, no gameplay has been released to the public domain. Without an idea of the actual gameplay loop we will be experiencing, the project is relying on a lot of trust from the community to essentially mint on the promise of a fun experience without actual evidence. This could easily backfire and should things not sell as expected, we may see an unsuccessful mint or the floor price crash which can be a very difficult situation to recover from. The small community, especially on Discord can also be seen as a potential red flag. With just a day or so from the targeted drop, the project would need to see over half of its members make a purchase for it to sell out. This might be a difficult task given the current market condition and overall sentiment. Despite this, the WGMI team is eager to see what the future holds for MetaVolution.

‘A God Amongst Men’ is an upcoming film based on Muhammad Ali’s visit to Tyneside (UK) to save a boxing gym from cl… https://t.co/fQCrYhyaql

Film Based on Muhammad Ali to Launch an NFT Collection
Float like a Bored Butterfly Club, sting like a Building… https://t.co/9700bjLIWK