We spoke with Danny Casale ahead of the launch of Coolman Universe's second collection, Babies. In the exclusive interview, Danny explains his vision for the project and reveals some of his future plans. 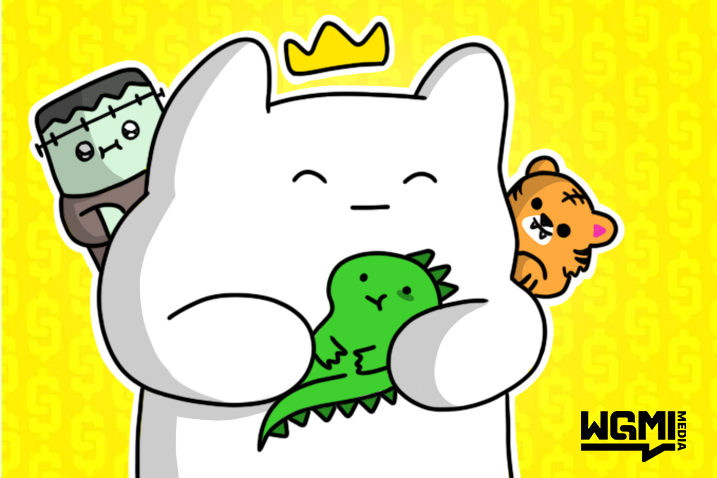 Running a couple minutes late for our call, Danny apologizes profusely and tells us a meeting with TikTok is running over. It reveals a lot about the kind of guy he is. On the one hand, he is planning and executing collaborations with some of the largest and most influential brands on the planet. On the other, he has the thoughtfulness to take the time to let me know he is on his way. I think it is this thoughtfulness, modesty and relatability that has been the key to his success.

Danny Casale is an illustrator, visionary, and all-round creative soul that had amassed an extraordinary following with his YouTube content way before the proliferation of NFTs in recent years. He has 2.69 million subscribers on YouTube and 2.7 million subscribers on Instagram. His art is demonstrably popular amongst the masses, and I believe there are two essential ingredients to this success.

It just so happens that these ingredients are equally as effective and endearing for degens. We love cute art. And, right now, we could use all the positive vibes we can get.

Take a moment to join Blue Dude for some hot cocoa and a song pic.twitter.com/vWBKDNjZRH

Danny and his team launched their first NFT project, Coolman’s Universe, in December 2021. This collection is based on the antagonist of Coolman’s Universe, Spesh – a cute, squishy character that is travelling through the universe searching for his best friend.

The project has been successful by many measures. It is a 10k collection, it has over 25k ETH trading volume, and the floor price is currently hovering around 0.6 ETH.

Coolman’s Universe was launched during a wave of NFT excitement. The launches of Doodles and Cool Cats had very much established cute thick-line art as a leading meta in the NFT space. Danny’s art slotted perfectly into this category of PFP projects, and the launch of Coolman’s Universe truly captured the culture of the moment.

Babies will be a 20k collection, with 10k of them going directly to holders of the original Coolman’s Universe collection. Here are some of the cool things we know about the drop:

Babys Vs. Anti-Babys: 10k of the Babies collection are regular babies, and the other 10k are anti-babies. Anti-babies are punk-rocky, neon and radioactive – they will look completely different from regular babies. For every good baby, there will be an anti-baby counterpart that is “funky, fucked up and evil”. This will allow members of the community to choose whether their role in the community will be to fight for good (babies) or to fight for bad (anti-babies) – or maybe a bit of both.

Varying Utility: Depending on whether you are stocking up on babies or anti-babies, your experience in the community will be “completely different”, according to Danny. These sub-communities within the Coolman’s Universe will allow the project to provide a whole new element of entertainment and fun for their community. What this will actually mean in terms of real life utility at future events, parties, and brand collabs is yet to be announced.

Lowering the barrier to enter the Coolman’s Universe: The success of the original project and consequential strong floor price means many people are simply priced out of joining the community. This 20k collection will allow more people to join the community at a lower price.

Hype: A recent raffle for WL spots received 135k raffle entries. Even before the bear market, these numbers are insane. This kind of hype, especially in the current market conditions, is rare.

Despite the success of the original Coolman’s Universe project, the Babies collection is launching under considerably more difficult market conditions. While this may cause concern for some, I believe the bear market could very well play into the project’s hands. Danny’s art resonates with many people because it provides a form of escapism. It has a powerful underlying message that seeks to uplift his community. During a bleak bear market, this might just be the exact kind of relief we need.

With the successful second drop on the Coolman’s apparel line, and an IRL event at NFT NYC being extremely well received, the Coolman’s team continue to execute their plans immaculately. There is no reason to believe the Babies drop will be any exception.

From our 27 minute conversation, it is clear to me that Danny is just getting started. Yes, the Babies collection is a significant milestone in the development of the project, but it is just one step further towards his primary objective: making Coolman’s Universe a household name.

And his goal is looking more and more achievable. The Coolman’s team recently announced that a Coolman’s TV series, UR SPECIAL, is officially in development (NDAs require him to remain tight lipped on the specifics such as the network, celebrity voice talent, and specific characters). With Danny’s style already proven to be popular on mainstream media platforms, it seems inevitable that the show will only broaden the awareness of the Coolman’s Universe project.

And to me, this is the beauty of NFTs. It is a renaissance for artists that provides the funding required to realize their vision, and allows their community to reap rewards for supporting them on their journey. Coolman’s Universe is the perfect case study for how NFTs can be leveraged to bring a talented artist’s vision into reality.