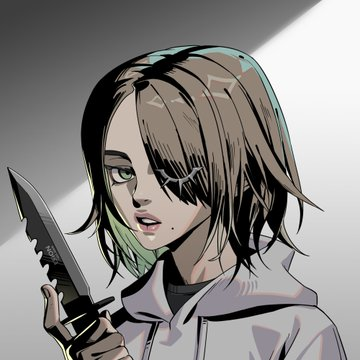 Esion has all the makings of a top-tier anime art project when we look at the quality of art and the level of anime art techniques used (outlines, colors, and shadow overlays), and the team involved (Beautiful Noise Studio).

Much of the information surrounding this project is purposefully kept under wraps at this time.  The main artist behind Esion is M_Li, and is from Seoul, S. Korea. His portfolio page can be viewed by visiting https://mlind.artstation.com.

Beautiful Noise Studios, a South Korean record label founded by hip-hop artist, “Mommy Son”, made their NFT debut around April 13th which is around the time they made their first Twitter post. The post included a link to Esion Club’s private Discord channel, in addition to information regarding their other anime project called Genesis_Senshi. Each project came with its own set of utilities, and by owning an NFT for one project, investors would gain access to the other upcoming projects.

The first collection of NFTs released by Beautiful Noise Studios was called “SLEEP EXHIBITION” and it has a total supply of 3,000 NFTs. It was announced that anyone who held three or more Sleep Exhibition NFTs would gain WL access to mint Esion in the near future, which helped the collection sell out in less than a minute during the mint phase.

The second collection from Beautiful Noise Studios is Esion, which will be their first anime PFP project consisting of both male and female characters. Much of Esion’s detailed information is still yet to be released.

Esion has partnered with GENE_SIS in order to bring future utility and collaboration opportunities for both projects. The utility and roadmap for Esion are still under development and yet to be announced.

MOMMYSON is a well-known K-pop hip-hop artist in South Korea, who is also the founder of a record label called Beautiful Noise. He has a decent following on his social media pages as well as a reputation for being an honest and talented underground hip-hop artist. He has made numerous appearances in Korean variety shows and Korean rap battle competitions, so he is a well-known celebrity figure in S. Korea.

MLin_D is an undoxxed, relatively unknown, yet extremely talented anime and gaming character artist from South Korea with more than a decade of professional experience. Not much personal information about the artist is available except for his art profile, Instagram page, and his Twitter profile – all of which are provided below for reference.

Previous work and collaborations include:

0xJee is an undoxxed engineering advisor and developer for both Genesis Senshi and Esion. It is unclear if he has worked on any other or previous NFT projects previously.

Mizuri and Jboy are the two community managers for Esion Club. They are undoxxed, and links to their social media pages are provided below.

The only official partnership they have is with Genesis Senshi in order to bring future utility and collaboration opportunities for both projects. Esion Club is not working on any additional partnerships or collaborations at this time in an effort to focus on organic growth and community building according to their official FAQ.

Esion Club made its first-ever Twitter post on April 13th, 2022 and they have amassed more than 84.8k followers on Twitter in that short a time span. They purposefully chose the path of organic marketing and avoided engagement in farming practices which is usually associated with high caliber NFT projects with real substance. Through organic marketing, project Esion has seen a lot of engagement on its Twitter posts which consists mostly of sneak peeks rather than the typical, tag and retweet for an opportunity to get on the whitelist method.

How to get on WL

Information regarding how to get whitelisted will be announced on Esion’s official Discord server where there will be whitelist opportunities, giveaways, community competitions, minting information, and more which will all be released as it gets closer to the launch date.

Collectors can also get whitelisted by holding a minimum of three SLEEP EXHIBITION NFTs which will allow them to mint an Esion for free + the cost of gas during their mint phase.

The latest anime NFT projects to release have all done relatively well thanks to the anime-meta. It is unclear if the anime meta scene is in steep decline, or if investors are looking for the next big anime project to invest in. In terms of the anime art style and quality, Esion may be the best that we have ever seen in the NFT space when looking purely at aesthetics and the techniques that are used to create each piece.

Azuki’s floor price went from 35 ETH to 8 ETH during the past week or so. This may be a signal that the anime meta is over, but it’s still too early to tell because Azuki’s price was negatively affected largely due to the founder’s IRL identity and the previous projects that he had abandoned. It will be important to look at other up-and-coming anime NFT projects including Genesis Senshi in order to gauge the market sentiment surrounding anime-meta NFTs at this time.

NEW: The University of Tokyo will offer courses in the Metaverse later this year. https://t.co/9gRwBLN5sW

Me and the squad lookin for the next bluechip NFT https://t.co/0KpWpispYH

Your WGMI Daily Update! Here’s what went down today in Web3 ⬇️ https://t.co/t6qwssnnl7