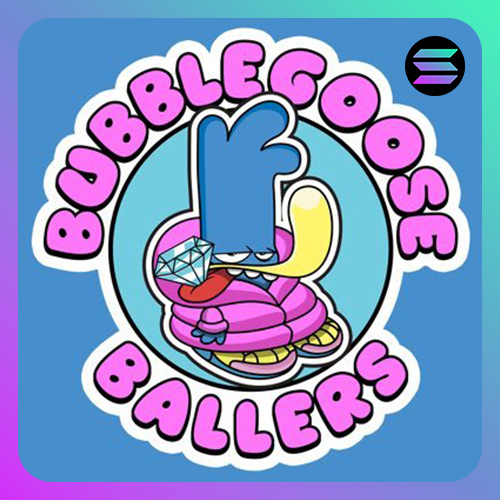 Bubblegoose Ballers is a community-focused Web3 NFT project created by Carl Jones who is the main artist behind ‘The Boondocks’, ‘Black Dynamite’ among others.

“When I was growing up, the Bubblegoose coat was a symbol of success in my neighborhood. All the ballers had them. So I used to draw this funny-looking goose in a bubblegoose coat that was balling out of control. And he stayed ballin’ in my sketchbooks for years, with the hopes that one day I could share this goofy bird with the world. The stories are honest and edgy like The Boondocks and Black Dynamite, but way crazier and more cartoony!”

“With Bubblegoose Ballers and our Web3 community, we aim to “be the change we want to see” in the ecosystem of entertainment by giving creators and fans new levels of involvement, creative freedom, and ownership of content.” [Carl Jones]

Carl Jones is best known for producing Adult Swim’s THE BOONDOCKS, BLACK DYNAMITE, FREAKNIK THE MUSICAL, LEGENDS OF CHAMBERLAIN HEIGHTS, and THE JELLIES with Tyler The Creator.

Graphic artist and illustrator. The pen behind the Catalina Whale Mixer. Working alongside Carl to take his sketches to the finish line.

Bubblegoose Ballers is one of the more hyped projects on the Solana blockchain at the time of writing. This is largely due to the resume of Carl Jones, and the reputation he has built over the years working on classics such as The Boondocks (an animation series on Adult Swim). Many other Solana projects without a doxxed artist have been extremely successful in recent weeks due to the success of Okay Bears. It is exciting to imagine how well Bubblegoose Ballers will do with Carl Jones and his team being directly involved on such a highly anticipated project while ‘Solana Summer’ is in the horizon.

Bubblegoose Ballers will very likely sell out of their 10k collection as long as there aren’t any smart contract issues during mint. The more important question is whether or not Carl Jones and his team will be able to continuously deliver value and withstand the test of time. Only a handful of NFT projects will make it in the long run, and Bubblegoose Ballers seems to check all the boxes.

Coming to a live stream near you https://t.co/swb6bv3TEI

In this article, we analyze the key arguments to determine whether this mfer’s departure was a stroke of genius, or… https://t.co/cYpky6OP17