Sales are down, projects are flopping and the market is crashing. Compared to this time last year, the NFT space doesn’t compare well. Are we witnessing the death of NFTs? 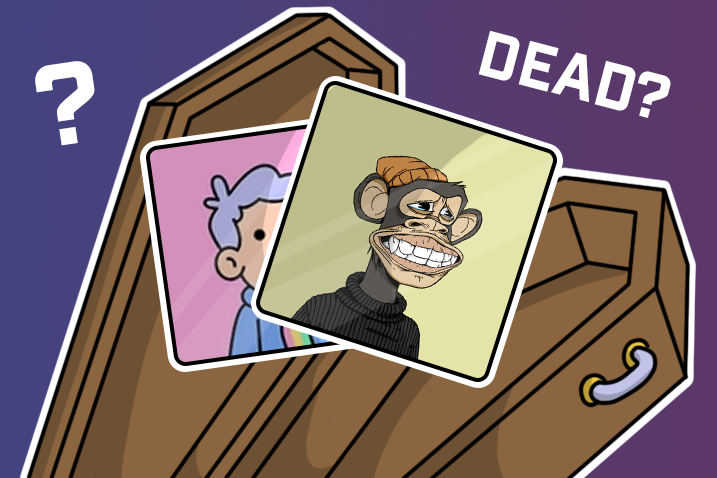 As we navigate through this seemingly endless bear market, the NFT space is, to put it bluntly, dry. Last year, we were traversing through a lush green jungle with delicious fruits dropping all around us, spoilt for choice and times were good. Now, that jungle has been decimated, leaving us crawling through a dry desert, starving, desperately seeking nourishment. Although we still stumble across some fruit from time to time, even the most delicious looking ones are unbearingly bitter. Only a select few remain edible.

At present, fewer projects are on the horizon, trading volume is down and we’re seeing an extremely high failure rate. Therefore, we have to ask the question: Are NFTs dead?

In November of last year, ETH hit an all time high of $4,812 (TradingView). Since then, alongside the market in general, we’ve seen the value drop significantly with a 3 figure ETH price now a real possibility. ETH reached 3 figures temporarily, but has since recovered. Falling in line with this, we’ve seen a continuous downward trend of trading volume, users and transactions hitting distressingly low points.

The story of CryptoPunk #273 is often cited as evidence that NFTs are dying. The punks are, of course, one of the earliest and well known collections in the space. It rarely leaves the top 5 in the OpenSea rankings.  In October of last year, Punk #273 was purchased for 265 ETH, and sold for just 55 in May, a staggering 80% loss. Other notable projects have also seen a decrease in entry price as we cross the halfway point of the year including Moodbirds and World of Woman.

Critics of the NFT space have always argued that this is just a bubble with an expiration date. The likes of Bill Gates have recently played down the long term health of the space, claiming it as just an “asset class 100% based on greater fool theory”. In greater fool theory, it is argued that an asset can be sold for more than it’s worth if someone out there is willing to buy it. As soon as enough fools are riding that asset’s money-making wave, the market will flood and run out of “fools”, thus killing the market. The Wall Street Journal also recently published an article stating that the NFT space is heading towards its deathbed after last year’s bull run, claiming active wallets are down by 88%.

It’s human nature to focus on the negative and the media knows this. After all, bad news generates clicks, and clicks lead to that ad revenue they need to survive. For those of us that live and breathe the NFT space, we know that we’re simply in a bear market and, eventually, things will improve.

Despite the lower supply of upcoming projects, we’ve still seen plenty of launches in the current climate to reach ‘blue chip’ status. Yuga Labs, the team behind BAYC, dropped their metaverse tokens, Otherside, to great success – with almost $1 billion being spent on the digital real estate within a 10 day period a couple months ago.

Solana has also enjoyed a successful period with many claiming we were enjoying a ‘Solana Summer’, which saw the release of a number of high value projects including DeGods, Okay Bears and Just Ape. Saying this, this narrative has definitely died down a little.

NFT NYC is also taking place this week. Attendance is up by over 10,000 people when compared to last year, demonstrating the increased interest in the space as a whole. While trading activity may be down, there’s very little doubt that the wider community is growing and we’re seeing more conversations about NFTs and their long term utility and integration. More people are entering the space, creating opportunities and wealth for themselves outside of flipping. At the same time, more and more brands and celebrities are also stepping inside Web3 as they see the huge potential within.

As someone who believes wholeheartedly in NFTs and blockchain technology, I can confidently say that NFTs are not dying and most certainly are not dead. What we’re experiencing at this moment in time is just the impact of the brutal macroeconomic climate, this is something that is affecting the stock market and crypto market too.

Although trade volume is down, the community continues to grow and now is the perfect time to get involved. When things are slow like they are now, you should take the opportunity to educate yourself, get involved with communities and build a network. By doing so, when the market begins to recover, you’ll be perfectly positioned to benefit.