A law firm alleges that Yuga Labs promoted huge potential returns on investment to “unsuspecting investors” to inflate its NFT value. Here’s what you need to know. 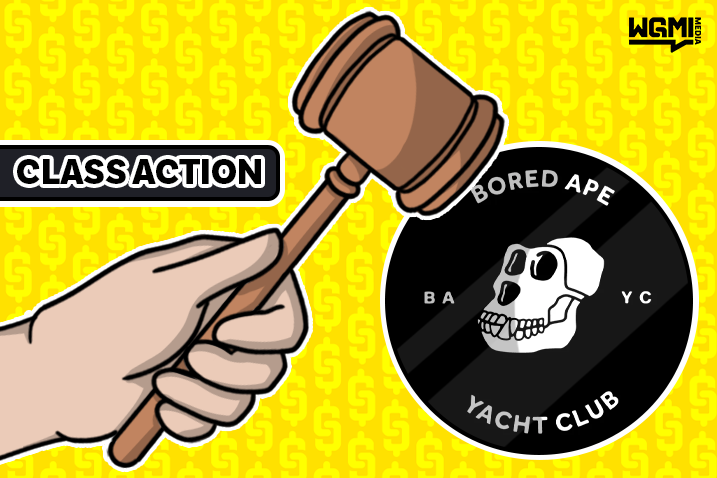 Last month after the BAYC Nazi accusations, Yuga Labs filed a lawsuit against Ryder Ripps, claiming that he had been “scamming” buyers with fake equivalent BAYC NFTs. Now, the tables have turned, and Yuga Labs could potentially find themselves on the receiving end of legal action.

Law firm Scott+Scott wrote a report last week claiming that Yuga Labs could face a class action lawsuit after it artificially inflated the price of its BAYC NFTs and its native governance token, ApeCoin. The report states that investors were “inappropriately induced” as Yuga Labs used celebrity promoters and endorsements to “inflate” the price of its NFTs by overpromising a high return on investment. These celebrities consist of superstars such as Snoop Dogg, Eminem, Paris Hilton, and more.

Scot+Scott’s report explains that the firm is currently looking for people who “suffered losses in association with the purchase of Yuga Labs tokens or NFTs between April 2022 and June 2022.” “After selling off millions of dollars of fraudulently promoted NFTs, Yuga Labs launched the Ape Coin to further fleece investors,” the Scott+Scott report adds. It explains that “once it was revealed that the touted growth was entirely dependent on continued promotion (as opposed to actual utility or underlying technology), retail investors were left with tokens that had lost over 87% from the inflated price high on April 28, 2022.”

As a result, the investors negatively impacted by this event are now “joining together through a class action brought by law firm Scott+Scott, to seek restitution for losses incurred from the purchase of Yuga Labs tokens and NFTs.” The case’s plaintiffs have yet to file an official complaint in a federal court. Scott+Scott is still in the early stages of seeking and finding potential plaintiffs who suffered losses.

While it may appear at face value that Yuga Labs have purposely inflated the price of ApeCoin and its NFT tokens, what Web2 natives do not understand is the market’s cyclical nature. It cannot be denied that the price action followed a typical pump and dump pattern, but this is something that we often see in the NFT space. What hasn’t been taken into consideration are the brutal macroeconomic conditions and the fact that we moved into a bear market at a similar time. In addition, the price of ETH has decreased but a substantial amount, too, so only naturally is the asset going to be worth less in the current situation. Many factors haven’t been accounted for in this accusation.

Most NFT traders are familiar with buying a token, only later discovering that it’s decreased in value by 50% or more. However, this is something that non-Web3 natives will not be familiar with.

In the last few months, the value of all Crypto and NFT assets has declined amid the broader financial market downturn. According to NFT Stats, over the past seven days, the average price of a BAYC NFT was $115,000. Just three months ago, a BAYC NFT token was worth $425,000. Scott+Scott and the investors involved argue that they were intentionally ‘dumped’ on by Yuga Labs. However, if we look at 99% of NFT collections at present, they are also worth a lot less than three months ago.

This event outlines the different thinking and mental of a Web2 and Web3 native. I’m unsure whether this lawsuit will bring any action, and only time will tell. Be sure to check in regularly for updates.