In a space that moves so fast, staying up to date is a must. Here are some Twitter Spaces that can help you keep you informed. 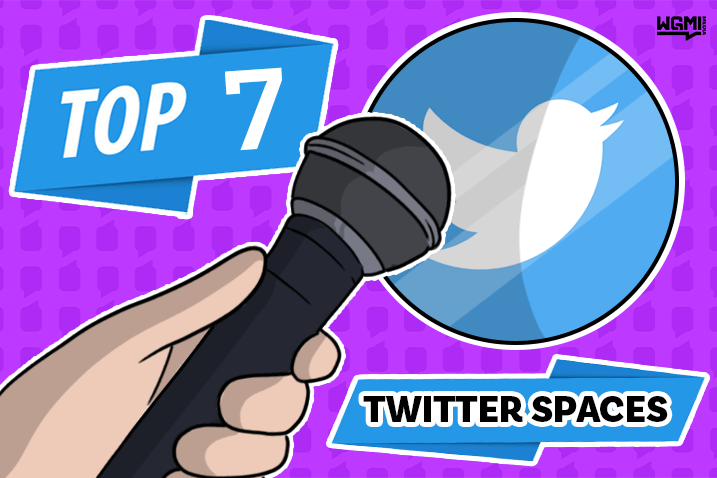 If you’ve been in the NFT space for some time now, you’ll know it moves rapidly. As the industry is emerging and still in its infancy, development and progression happen quickly. Missing one day of NFTs can completely throw you out of the loop, so it’s crucial to keep up to date when possible. After all, knowledge is power, and what better place to gain knowledge from the experts who have been here since the beginning?

There are many OGs who host regular Twitter spaces to discuss all things NFTs and Web3 to educate the wider audience. Tuning into these spaces can help you learn many new things on various topics, so it’s definitely worth it if you have the time. Remember, every day is a school day. There is an African proverb that goes, “a wise person never knows all; only a fool knows everything.” Let that sink in for a moment.

Without further ado, let’s dive into my top 7 Twitter spaces shows that can educate us and help us stay up to date with the market.

The first Twitter space to make a list is called the NFT Devil’s Advocate, hosted by WGMI’s very own Brett Malinowski and Dylan Shub. Brett is a successful NFT entrepreneur and YouTuber with a large following of 199.9k followers on Twitter. Dylan is the senior correspondent at WGMI, as well as the founder of FatCatsDao and Crown Capital DAO. Together, they host a live show which takes a candid look at Web3 projects and “all the NFT drama and news over the last week.” This show takes place every Thursday at 6:00pm EST, so be sure to tune in.

Rug Radio is by NFT influencer Farokh, who has a whooping 313.1k followers on Twitter. Rug Radio is the first “fully decentralized Web3 media ecosystem” which gives a platform to its community and its hosts to put out content. Rug radio is “hosted for the people, by the people” and it allows hosts and content creators to benefit from and own the rights to whatever they create.

As community members can apply to host shows, the topics and schedules do not follow a consistent weekly pattern. There are a variety of topics, ranging from “Elevating Women in Web3” to “Solana Sundays.” Saying this, Farokh himself often hosts a show called “GM NFTs,” where he covers all things current, often with guest speakers. Announcements of upcoming shows can be found on Rug Radio’s Twitter page or the schedule section of its website.

Nifty Portal is an NFT morning show hosted by notable names Pio.eth, NFTNick.eth, Kix.eth
and Easy. These guys are a community of collectors and traders looking for the next big NFT project. The show is hosted every morning at 9 am EST from Monday to Friday. By browsing through its Twitter, we can see that all of the spaces previously held had a large number of people tune in, mostly in the thousands. If you’re more into the trading and alpha side of things, this one could be for you.

While this one isn’t a media outlet or strictly a radio show, Shira Lazer is known for hosting and also for being a guest speaker on valuable Twitter space. Shira is the founder of WhatsTrending, a women’s empowerment speaker, and a leading female voice in NFTs. She has a large following of 366.9k followers on Twitter and appears to be quite an influential figure.

Shira does not have a regular Twitter space schedule like many of the others mentioned here, but she often hosts or is speaking on ad hoc shows. The topics appear to be surrounding Women in Web3, alpha or mindfulness in the Metaverse. If this sounds like something that interests you, then it may be worth following her on Twitter with notifications on so you catch the next one.

OnChainTV is an all-inclusive Web3 space where everyone is welcome to have a voice. It was founded and hosted by Web3 educator M0RGAN.eth. The target audience is “late night degens”, as the topics all revolve around crypto and NFT education. Morgan has a strong following of 122k on Twitter, and she Tweets regularly. OnChainTV’s Late Night Degens show takes place every night at 10 pm EST. If this sounds like your cup of tea, then be sure to check it out.

The topics include titles such as “Bull Market Incoming? Bear market Over? Metaverse Hype + Win a ROLEX!” and many of its Twitter spaces have had more than 30 thousand people tune in. I’m unsure whether the high engagement is for the news or a chance to win prizes. Nonetheless, it’s still very impressive. While there is no official weekly time schedule, spaces are announced in advance, so people have enough time to put them on their calendars. Head on over to its Twitter if this interests you.

Last but not least, we have the Flamingo DAO. Flamingo DAO is an NFT-focused DAO that aims to explore emerging investment opportunities for ownable, blockchain-based assets. It boasts a strong following of 49.1k on Twitter, and every Friday, it hosts a Twitter space show called Flamingo Fridays. Every Friday at noon EST, the team discusses different topics. Additionally, it regularly invites guest speakers and projects to its presentation to broaden the scope of the conversations. This one is a little less well-known, so if you’re into niches rather than general news, this one may be for you.

There we have it; my top 7 Twitter spaces talk shows. Whether you’re a veteran in the space or if this is your first day, there is something for everyone’s. Education is the only way to increase your chances of success in the NFT space. Keep learning and stay hungry; it’ll pay dividends in the future.