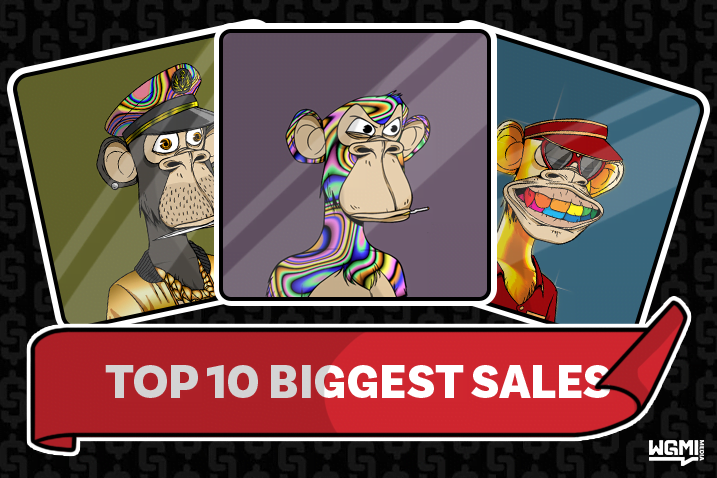 *All values are based on the value of ETH in USD at the time of the sale. All rarity info was pulled from raritysniper.com*

This ape was previously sold just 1 time for 5 ETH ($14k) before landing in the wallet of a user called “MachiBigBrother” for a cool 425 ETH. Huge congrats to the seller, who made over a 100x gain on the flip!

The 9th highest Bored Ape purchase goes to the exact same user (MachiBigBrother) just two months after their first massive ape purchase. This one followed a nearly identical path, being sold just once prior for 5 ETH before ending up with its brother in Machi’s wallet for another 430 ETH.

This one may have been an aesthetic purchase, as the ape yields a much lower rarity score than the previous one, sitting at just # 1752 out of 10,000. However, it possesses a 1/42 trait: the black suit, giving it a dapper look. The zombie eyes, and flat brim BAYC hat are also big score boosters.

Our shiniest sale so far, it’s obvious why this one landed on the list: the sailor hat. Just kidding, it’s the gold fur: a 1/46 trait. Gold apes seem to be the most highly coveted in the collection (as you’ll see later in this list), with this one going for a whopping 666 ETH despite only being ranked at # 246.

The nameless buyer snagged this one in February after ETH took a tumble from its all-time-highs of over $4500 down to $2769 at the time of the sale. Little did they know, the downtrend would continue. But with a sale this big, you have to think they’re in it for the long haul.

Finally, a sale that aligns directly with its rarity ranking! The 7th highest BAYC purchase goes to the 7th rarest ape: # 8135. This ape has two traits that appear in less than 1% of the collection: the “bored unshaven dagger” (28/10k), and the “trippy captain’s hat” (65/10k). It also sports a snazzy gold shirt denoted as “hip hop” clothes, and “hypnotized” eyes, giving it two more large boosts to its score.

The ape was purchased by MetalinkLabs for 550 ETH way back in September, just 18 days after it was purchased for 500.888 ETH. Metalink is a crypto-native application that is used for chatting, and the company prides themselves on holding a range of Blue Chip projects. After placing the winning bid, the company’s founder, Jake Udell, wrote to Twitter: “Say hello to our handsome friend, #8135. What should we name him?”

Another golden ape lands at our 6th spot, and it’s our first to top $2M! This one sits at rank # 62 thanks to the gold fur, rainbow teeth, and service outfit.

This trippy fur ape comes in at number five on the highest valued Bored Apes with its sale last September for 769 ETH. Also notable about the sale is that it came from a familiar name: MachiBigBrother. Except this time, they were the seller! The ape was bought for 42 ETH in June, and then flipped for a near 20x gain just 3 months later.

The value of course comes from its unique fur (a 1 of 77 trait) and it’s low trait count of 4. There are some conflicting rankings among rarity sites, with Rarity Sniper listing it at # 52 out of 10,000 and Rarity Tools listing it at # 9. Either way, it’s no surprise that this one is being viewed as a highly-coveted asset.

The king has arrived, and he’s sitting at number four on our list. Similar to the last ape, this one has the super rare trippy fur plus another 1/77 trait: the “King’s Crown”. This beautiful combination only ranks the ape at  # 423, but it also makes it extremely unique. For that reason, the ape has had some large sales in its lifetime: the first came last August for 397 ETH (around $1.2M), and the second came 2 months later when Draftkings founder Matt Kalish sold it for 696.969 ETH.

Since then, the trade history shows two more trades within the last 3 months: the first for a measly 142 ETH (just under $300k) and the next just 8 days later for 360.005 ($726k). You have to think that there was some kind of suspicious activity going on… A hack resulting in a stolen ape? Wash trading? Or maybe someone just panicked their way to a massive loss. We can only speculate.

The number three highest all-time BAYC sale comes at an astounding 1080 ETH. This massive purchase was made by Chain CEO Deepak Thapliyal, who still holds the ape in the same wallet today. “Say hello to my little friend,” Thapliyal tweeted after purchasing in late January. Thapliyal sold off several other assets to raise funds for this one, including several bored apes and some MAYC serums.

The ape’s gold fur and “smoking jacket” put it at # 324 on the rarity ranking. At the time of writing, the ape is currently listed at 1175 ETH, which would technically be around a $1M loss in USD if a sale were to go through.

The trend continues as gold apes take over the top of the list. But ape # 3749 wields an extra superpower: laser eyes. This 1 of 69 traits is wildly popular amongst crypto and NFT enthusiasts, as many prominent investors have been seen adding laser eyes to their profile pictures to denote bullishness. The gold fur and laser eyes are enough to rank this ape at # 11 out of 10,000.

This particular ape was sold twice before winding up in the hands of the popular blockchain-based game: The Sandbox. Its first sale was last July for 105 ETH ($197k); its second sale was last August for 400 ETH ($1.26M), and its final sale was less than a month later for 740 ETH.

The Sandbox made a Twitter thread following its purchase, explaining that they believe in the future of NFTs and the Metaverse. They have held it ever since, and it seems unlikely they will let it go anytime soon.

What would you do with $3.4M? Well, this person bought a JPEG!

Purchased back in October for 852.39 ETH, this ape had the honor of being auctioned off at the famous Sotheby’s Metaverse auction house. With ETH sitting at just under $4000, that makes this the largest BAYC sale (in USD) ever!

#AuctionUpdate #BAYC #8817 sells for a RECORD $3,408,000 USD! This is the first time it has been made available since it was minted. Less than 1% of all Bored Apes have the gold fur trait. From the collection of @j1mmyeth #NativelyDigital pic.twitter.com/HfFTpEOIUh

The lucky seller is long-term NFT collector and founder / CEO of ‘nft42’, Jimmy (@jimmyeth on Twitter). He has had his hands on many high value NFTs, but this one could possibly be the most memorable.