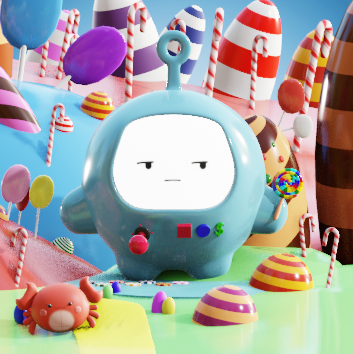 The Tomodachi AI genesis collection will be a fully animated collection of 7,777 cute robotic NFT friends designed to act as a companion using Web3 and AI technology. Owners of these upcoming NFTs will now have the ability to talk, engage with and play with their Tomodachi AI NFTs directly on their desktop computers. In addition to interacting with their Tomodachi NFTs, they will also come with the ability to serve as virtual assistants using AI technology, which is expected to get smarter and develop over time.

Owners of Tomodachi NFTs will be able to engage and interact with their companions upon release of their Alpha version approximately 2 weeks after their mint phase. Play to Earn mechanics and their native tokens and their in-game economy will get integrated in the future. Last but not least, Tomodachi AI NFTs will be integrating AI technology which will benefit owners, similar to owning a virtual assistant, in the distant future.

The Tomodachi project has a long-term roadmap in mind. After one month, they will have integrated the ability for owners to say hello to their Tomodachi, and in approximately 2 weeks after that, they expect to incorporate their ‘Alpha Build’ where owners can take care of their Tomodachi’s to Earn tokens. After the Alpha version is released, they will introduce the Tomodachi economy and have an MVP (most viable product) version to market their product and expand their company which should be ready in 8 to 12 months’ time. Using the MVP Tomodachi expects to begin their Series A Funding phase in order to expand their company.

There is very little information available regarding the team behind Tomodachi AI. The artist behind the project is known as @superlativeseth on Twitter, and he is not yet doxxed at this time. In addition to @Superlativeseth as the main creator and artist behind this project, we also see on Twitter that he is working with @0xytocinX, an NFT incubation powerhouse that is directly working with and helping to build various high profile NFT projects such as Project Godjira and Project PXN.

0xytocin is known as a great team with a winning track record in the NFT space as they are the team that is responsible for the success of Godjira Genesis & Godjira Gen 2 and their high current floor price. 0xytocin innovates NFT staking technology by allowing inter-project interoperability by creating staking passes with “support across 3-4 NFT projects”.

We hope to see more information released about the Team behind Tomodachi on their upcoming official website that is soon to be released. Currently, no additional information surrounding the team is available on their Twitter or Discord server.

Most of the marketing surrounding Tomodachi AI seems to be Twitter & YT Influencer based so far. Since the Tomodachi AI team is working directly with 0xytocin’s team, they have been doing a great job marketing to the right influencers and communities through various WL giveaways and AMA events, as seen in the Collaborations section (on the right).

The community seems to be hyped for Tomodachi to drop. However, most people are there through whitelist giveaways, and there are low-quality conversations. There are approximately 18k subscribers on Tomodachi’s Discord Server, and approximately 37.6k followers on Twitter, making it more than likely that this collection will sell out. Tomodachi’s team has been doing a great job communicating to their community regarding their strategy around the launch and their reasoning behind their purposeful slight over-allocation well before the mint period so that investors could adapt and make the best possible decision for themselves.

Listed below are only some of the many projects that are collaborating with Tomodachi AI:

Tomodachi is an NFT project with big aspirations. They will be the first NFT project that incorporates Web3 technology to create a Tamagotchi-like experience for their holders. In addition to being the first-of-its-kind, they will have a modest mint price of 0.085 ETH for those whitelisted, although the public mint price is still yet to be determined.

Many first-of-its-kind NFTs tend to do well at least to start (i.e. Cryptopunks as the first PFP NFT, Generative Dungeons as the first openly playable Web3 NFT, Cyberkongz being one of the first NFT projects to reward holders with their own $BANANA tokens, etc.). Tomodachi will be the first Web3 NFT Tamagotchi-style project, so it has the potential for building hype and generating FOMO. People are drawn to the classics as well as towards nostalgia, and we are constantly seeing more and more revivals of older trends (i.e. rollerblades, polaroid cameras, bellbottom pants, vintage couture, etc.). The combination of new and old technology has a great narrative and storyline and generally tends to work. As long as this project can launch without any major hiccups during the mint phase, Tomodachi looks to have a promising future, at least for the short term.

In addition to pioneering an innovative way to combine Web3 and NFT technology, the Tomodachi project has a long-term vision. The team behind Tomodachi sees itself as a startup company still in its infancy, that will focus on three major pillars to grow its brand: Friendship, Innovation, and Branding. They are looking to establish themselves in both the Artificial Intelligence (AI) industry and the gaming industry, both of which are experiencing high levels of interest and investment.

Very little information about the team is available, which leaves more risk for investors as founders can more easily pack up their bags and leave their NFT project behind if their IRL reputation is not on the line.

The AI technology may not be available immediately. However, their Web3 integration alpha build is scheduled to be ready approximately two weeks after the conclusion of their mint phase.

It is important to pay attention to the Tomodachi Build Timeline and Roadmap, as owners will not be able to do anything AI-related until their official product is released. The Tomodachi roadmap covers the Alpha Build and MVP stages, but there is no mention of when the final product will be available for release. At this stage, the Tomodachi NFT project is more of an experiment or a novel idea to see how and if they will be able to integrate AI technology into NFTs as an additional utility for holders.