The Story of WAGMI United

In early 2022, WAGMI United bought Crawley Town FC, an English Football club in the third tier of the Football League. They plan, as a group, to take the club to the highest level. 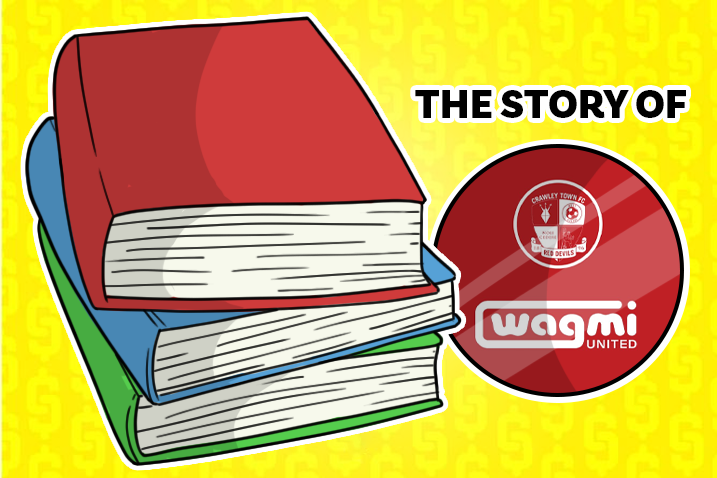 Who Are WAGMI United?

Earlier this year, sports gambling analysts Preston Johnson and Eben Smith, successful NFT traders, combined to become co-founders of WAGMI United. Further to this, the investment group has the backing of ultra-successful individuals such as Gary Vaynerchuk and Daryl Morey, alongside many more.

The intention of this consortium was to purchase a football team from the lower divisions of the English Football League and take them to the top. After an unsuccessful attempt to buy Bradford City in December 2021, they approached Crawley Town FC at the start of 2022, and, as they say, the rest is history.

Now, a few months after the dust has settled, WAGMI has just launched its official NFT collection with the intention of giving fans a meaningful voice as to how the club is run. The collection consists of 12,000 NFTs at 0.35 ETH per mint. As of now, more than 10,000 have been minted, and the owners have wasted no time implementing positive change within the club already, including the hiring of a new head coach, and the onboarding of several specialists to ensure the team can play at maximum capacity. NFT holders will have utility benefits such as voting rights, limited edition items, and AMA with players, as just a few of many examples.

Why Has It Been Successful?

WAGMI United has the backing of people who have already experienced incredible levels of success in business, most notably in the Web3 and NFT space. Therefore, the project has already generated close to $4 million through token sales to reinvest into the club. For a team the size of Crawley Town, which has a total stadium capacity of just over 6,000, this is an obscene amount of money that has already been put to good use.

The secrets behind its success aren’t down to any forms of witchcraft, but instead, through prior knowledge of how to market in Web3 and the importance of cultivating a community. Nothing brings people together like sports and WAGMI has been able to use this to leverage the passion of the fan base, uniting them with the common goal of rising up the ladder to the Premier League. Giving holders genuine opportunities to shape the direction of the club, is most definitely something that will keep this going for the long haul.

Compare this to other drops from famous brands and artists and the difference is night and day. The closest comparison we can make is with the global football juggernaut, Liverpool FC. Launching 171,000 NFTs in April, however, they only sold a measly 10,000, equating to under 6% being minted at launch. Considering the size of the fanbase across the world, Liverpool would have been expecting a huge demand for their token but utility was non-existent, and it was seen by fans as just a way to exploit them. This goes hand in hand with the majority of drops from famous entities as they are still stuck with Web2 marketing techniques, lacking the understanding of Web3 culture.

While it is still incredibly early days for WAGMI United and Crawley Town FC’s adventure, the signs are very promising and the support seems largely receptive to the new ownership. Being the first foray by a Web3 focused investment group into football, this could be the spark that ignites many more to follow.