The Potatoz By Memeland

Memeland by 9GAG recently released its free mint, “The Potatoz,” a project that has created excitement among NFT investors. 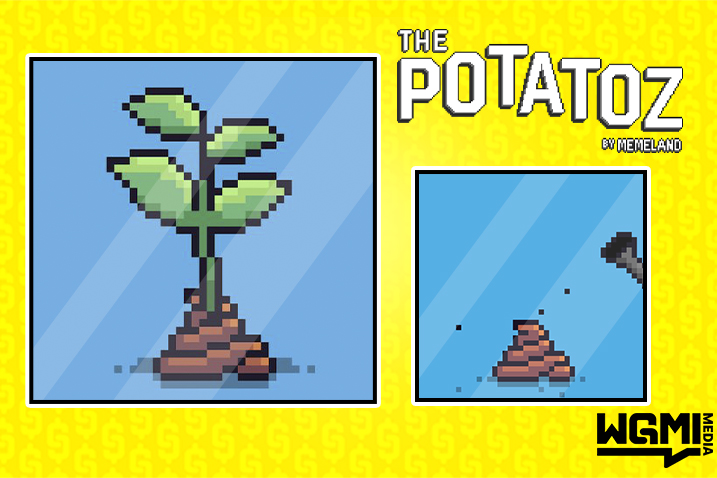 In February 2022, renowned social media brand, 9GAG, joined the NFT space after announcing multiple upcoming projects. Since then, they have released “YOU ARE THE REAL MVP” and “The Potatoz”, a collection of 9,999 utility-enabled PFPs with each token acting as a ticket into the Memeland ecosystem. Besides offering exposure to 9GAG’s future, “The Potatoz” are also related to the Memelist, $MEME, and Memeland MVP.

Memeland incorporates lore into its ecosystem to add a layer of anticipation and excitement. “A long time ago in a memetaverse far, far away… Memeland was a deserted land unsuitable for life. Until years ago, early lifeforms started to appear. Memeland’s first residents, it turns out, were a bunch of Potatoz. Who left the Potatoz there?” 9GAG has always been known for its creativity and storytelling, aspects it incorporated into The Potatoz collection through the NFTs. Each Potatoz NFT will grow and evolve through multiple stages, eventually becoming a spud-themed artwork that will be usable as a profile picture.

Q: Will the current rarity of The Potatoz change?
A: Yes.

"Type" is just one of the traits. It's like the fur, body, or skin. More traits will be revealed when the Potatoz grow. As rarity considers ALL traits, the current rarity is not final.

While “The Potatoz” is not the main project, it leads up to the anticipated collection, “MEMELAND CAPTAINS,” a collection of 9,999 PFPs that unlocks $MEME, memberships, IRL events, upcoming drops, and more.

While there were many ways to obtain a whitelist spot, that ship has sailed. The team does have a project titled, “YOU ARE THE REAL MVP,” a collection that focuses on bringing all that 9GAG has to offer to one group. Holders of the MVP have allowlist for all future Memeland & 9GAG projects, including 3 spots for “The Potatoz.”

The launch of “The Potatoz” has taken the NFT world by storm. The free mint touched a floor of 1.1 ETH after stabilizing at 0.8 ETH, showcasing the consumer support behind the project. Considering that it’s a 10k collection, we are in a bear market, the NFT acts as a ticket into the 9GAG ecosystem, and it was a free mint, it’s difficult to believe that the project performed as well as it did. After announcing recognized advisors such as Gary Vee and the successful mint of “The Potatoz, ” many have begun to see the communities’ belief in 9GAG and what is being built.