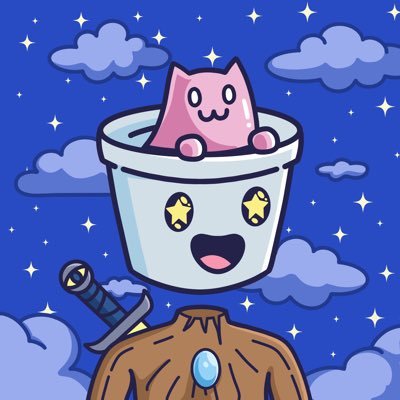 Deep in the darkness of space, two atoms clash, creating a huge explosion of red and orange. From this, a lush green world, populated with trees and rivers is created. A swirling portal appears from nowhere, throwing out 3 humanoid beings with pots for heads. One lies face down, seemingly unconscious while a feline crawls out its pot. Another, with a flaming skull pot for a head, lays sad and dejected while the blue fire where its hair should be, dances in the wind. The third potheaded being, confused, springs up and crawls on its needs to the camera, with panic all over its face. It looks like it’s desperately seeking our help.

This is, more or less, all we have to work with for this mysterious project. No website, Discord or mint details are available but despite this, the project already has a 49.4K following on Twitter which suggests that there will be a lot of hype around it.

Some artwork has been teased showcasing vast, open lands and free mints have already been airdropped to 5 members of the community and another 5 will be gifted soon. We also have what appears to be the first reveal of a couple of Pots NFTs. With the Twitter account being just a month or so old, no doubt we are at the very start of this journey.

There is zero information on the roadmap at this moment in time. Most projects, however, have a focus on community and often launch a range of merch so it wouldn’t be a huge surprise to see Pots follow suit. We can only wait and see.

While there is no official announcement on the team, a few members can be found within their Twitter network. We can be certain that more information will be revealed in due course.

Very little is known about lerk.eth. They have a following of 209 on Twitter and also founded Degen HQ, although it still is unclear what this is.

Jojo is a logo designer and illustrator. While not listed in their bio as working on Pots, a little digging reveals a tweet showing that they’ve been working on it for the last few months.

Founder of The Habibiz, Ramo boasts an impressive 153.5K Twitter followers. Alongside advising for Pots, he also assists with Celephais and Last Hopium.

Part of the core team, it is still unclear what responsibilities probablyjohhny.eth has. He is also a mod Coolman’s Universe.

With so little to go on we can only speculate on the future of Pots. The artwork from what we’ve seen is unique and likely to appeal to a wide audience. The community is hyped with thousands of followers and interactions despite the modest information provided at this moment. With plenty more to come, it would take a monumental disaster to derail the excitement surrounding this project. Sometimes we have to count on gut feeling, and because it’s early days, gut feeling says get this one on your radar and keep it there.

Much like above, speculation is all we have and it is far too early to make a true judgment of what this project may or may not be. As with all projects in their infancy, poor utility, high supply, high mint price or an underwhelming roadmap could kill off all hype, however, there is little to suggest this will be the case. The team seem to know what they are doing given the current buzz around it, and the free mint giveaways provide evidence that they have the right intentions. All in all, there’s no real concerns to be had at this moment in time.

Celsius officially files for bankruptcy. Here’s what you should know about the situation https://t.co/66oY07TXhx

BREAKING: OpenSea is laying off 20% of its staff, according to a message from CEO Devin Finzer. https://t.co/EnfKopP0tq