New ENS Meta – What is going on?

Can numbered ENS names make you a millionaire? Or is it just another passing trend? 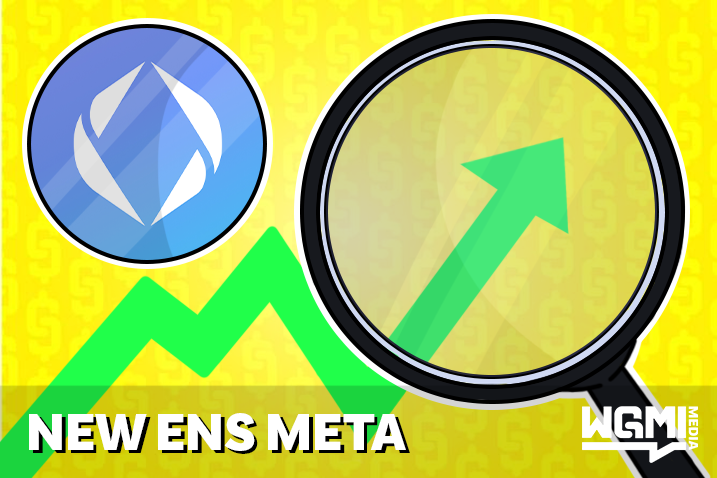 You may have seen some chatter online about the growing popularity of ENS domains, specifically those comprised of low numbers. A surge in sales of ENS numbers 000-9999 (.eth) has sparked huge interest amongst NFT whales, with hundreds of ETH flowing into these purchases. Is this the new meta?

First, let’s take a look at what an ENS domain means and how they became so popular. According to their website, the Ethereum Name Service (ENS) is “a distributed, open, and extensible naming system based on the Ethereum blockchain”. In layman’s terms: they sell usernames as NFTs on the Ethereum blockchain. With this service, you can buy a username, connect it to your ETH address, and have your wallet displayed more recognizably on the blockchain. You can also use it to meme, or flex on your friends.

Social media has helped tremendously with ENS’s success. Many NFT enthusiasts discovered the service during the peak of the NFT bull run last year, and began using “.eth” names on their social accounts. On top of that, the company garnered a heap of attention after airdropping ENS holders a significant amount of money via their token last fall. Now they’re getting another wave of hype with some eye-popping sales of numbered domains.

People are buying up the 3 digit ENS names like crazy. The current floor price (at the time of writing) for ENS 000-999.eth is a whopping 31 ETH, with the highest last sale being 000.eth for 300 ETH! Smaller players are buying up the higher digits as well; the floor price for 4 digit ENS names (1000-9999.eth) is now approaching 2 ETH. The owners of these usernames have even formed an exclusive discord called the 10kClub.

It doesn’t stop there – the FOMO has now flowed into various number-related ENS domains, including those in other languages. The 999 CN Club is a community centered around the first 1,000 ENS numbers using Chinese digits, and their floor has been rapidly climbing. This has led NFT flippers to chase any numerical ENS for different languages, as well as sneaky variations of the 3-digit numbers (adding prefixes, flags, etc.). In the last few hours (at the time of writing) the activity tab for ENS is flooded numbers; more than half of the domains being bought are some combination of digits.

So, why is this happening? Well, it might just be the new meta. People are always seeking the next big thing, and massive sales have drawn the eyes of plenty of NFT investors. Many will make a quick flip during the hype, while others are trusting that this trend will be their path to millions. This user was kind enough to explain his 3 digit ENS purchase of 9 ETH (~$18,000 on the day they tweeted it):

Seems reasonable! The uniqueness & scarcity might be enough to deliver down the road, but for now it is just another high-risk, high-reward play. And hey, if it all goes to 0, at least you can chat about the journey in that exclusive Discord server. Cheers!