Is ‘For The Culture’ Burning NFTs a Stroke of Genius?

For The Culture, a free-to-mint NFT project, recently utilized a highly controversial burning mechanism. In this article, we assess whether this was a dick move or a very intelligent form of marketing. 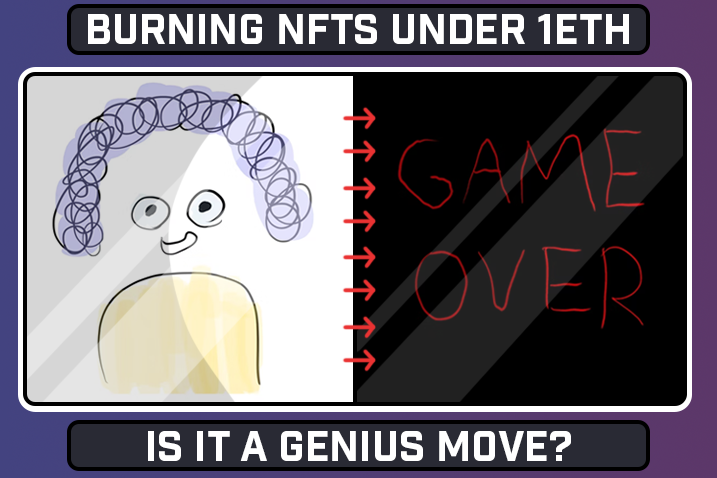 For The Culture, also known as FTC, is one of the latest free-to-mint, meme-esque projects to be launched on the Ethereum network. It has built a solid social media presence and garnered 123.3k followers on its Twitter so far. The collection consists of 6,969 NFT tokens, and its launch took the space by storm, partly down to its innovative sales mechanics. Not only was FTC free to mint, but each minter was airdropped 0.01 ETH for minting. This essentially meant that FTC paid people to mint (minus gas fees). Unlike many other degen projects in this category, FTC has its own website and Discord, which actively suggests that they are trying to build a community. The artwork is somewhat simplistic and questionable, but it certainly fits the meme narrative.

From launch, FTC experienced incredible trading volume and activity on the secondary marketplace. There were runups to an ATH of 0.5 ETH, and support was consistently found just above 0.2 ETH in the early stages. Trading volume has been steady and the floor price now sits at 0.137 ETH.

Last week, FTC announced two events. First, a burn event. Second, a strategy to punish paperhands. This strategy, when implemented, was something that many considered to be somewhat controversial.

On June 8th, FTC announced the details and the rules of its “Big Burn” event. FTC holders were able to burn their NFT tokens between the 11th to the 13th of June for an “upgrade”. The burning of NFTs is usually utilized to reduce the supply of a collection in attempts to raise the value.

Not long after the burn event was announced, on June 9th, FTC posted a Tweet stating that the team “want to play a game” with a 24 hour warning to all “paperhands”. At this time, people were unsure of what this meant. On June 10th, the FTC team shared more Tweets aimed at holders who had their FTC NFTs “listed under 1 ETH”. Warnings continued to be dropped throughout the day via more Tweets, another example is a Tweet that stated that the team are “coming for you paperfcks”. This was the first clue that something was about to happen. A final declaration was made later in the day when a Tweet explained that the “game will be over for paperfuckers”. It was unclear whether this was an empty threat or not.

It was later discovered that these threats were certainly not empty. Not long after the final warning, another FTC Tweet instructed paperhands to check their wallets. Holders who did not de-list or had their FTC NFT token listed below 1 ETH were not met with their expected token, but instead a ‘Game Over’ token. The FTC team had altered the metadata of the NFTs listed below 1 ETH, thus punishing holders who did not conform.

Essentially, this was another burning mechanism in an attempt to inflate the floor prices of the tokens that are still in the game. This further reduces the supply of the collection as the ‘Game Over’ tokens can now be viewed as worthless. To add salt to the wound, OpenSea does not automatically refresh metadata. Some people had been trading FTC tokens that appeared to still be in the game, however, when the metadata was refreshed, they turned into a game over token.

To say the least, this stunt was very controversial and questionable. Holder’s assets had been burnt involuntarily and as you can imagine, there has been a divided opinion amongst the community.

With any controversial move within a community, comes split opinion and uproar. A few members argue that this stunt forced people’s behavior against their free will, as well as it being an attempt to manipulate the floor price. This can be viewed as very morally questionable. Despite this, many think that this is an absolute stroke of genius. Looking at the comments on this Tweet, many people are claiming that this is the “best idea ever”.

If we look at this purely from a marketing, growth and exposure perspective, it is a highly intelligent form of Guerilla marketing. In other words, an unconventional method which is used in order to promote the project. Even though it was highly controversial, the stunt quickly had everyone on Twitter and in several alpha groups talking about FTC, as it spread like wildfire. Afterall, there’s no such thing as bad publicity, right?

The fact that this stunt excited the community and created even more interest suggests that the team knows what they are doing with regards to marketing. Inspired by goblintown and the use of the sound meta, FTC hosted a Twitter space where people joined and repeated “burn for the culture” and “burn it” for 15 minutes straight, portraying a cult or tribe-like vibe. Using this repetitive language provides a low barrier to enter and participate in the community. It’s quick to understand and meme-like, allowing many to easily jump on the bandwagon. All of this is indicative that the founding team are making strategic decisions with intention.

Whether this is a dick move or pure genius is highly subjective and up for debate. What cannot be argued is that the burn has sparked interest in the FTCs worldbuilding, storytelling and lore. Bearing in mind that this was a complete degen, meme and free-to-mint project, it hardly comes as a surprise that they would do something so outrageous. It’s branding revolves around a big middle finger saying fu** you to the viewer. The whole aesthetic and feel gives off very jokey, careless and nonchalant energy. They pride themselves on doing whatever they want, whenever they want. This stunt falls perfectly in line with its personality and what the team are trying to portray.

We can debate this all day, but what cannot be argued is that the majority of the community are loving FTCs recent behavior. The NFT space is going through extraordinary change. As old narratives die, new ones emerge. At present, it appears that the projects who are doing something fun, innovative and unusual are the ones who are enjoying success. FTC might just be on to something here.