The Pudgy Penguins rise after being acquired by Luca Netz. Here’s what you need to know. 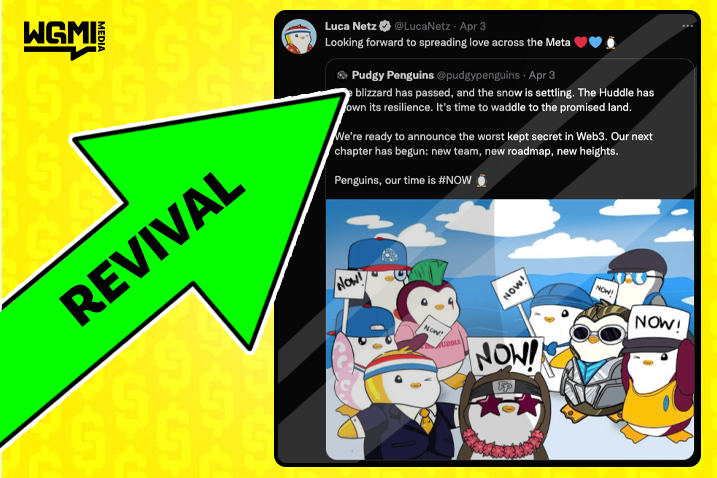 The cute Pudgy Penguins is an NFT collection of 8,888, and it was amongst the first profile picture avatar-style collections to launch shortly after the Bored Ape Yacht Club in the summer of 2021. The project quickly generated hype and enjoyed success in its early days. However, earlier in 2022, Pudgy Penguins faced a challenging period where it met a series of problems, including the removal of co-founder ColeThereum due to failure to deliver goals. In addition, the founders allegedly were draining the treasury of funds. The floor price around this point was just below just 1 ETH, and the project struggled.

Shortly after ColeThereum was voted out, entrepreneur and avid NFT collector, Luca Netz, purchased the NFT collection for 750 ETH, which at the time was about $2.5 million. The acquisition at the time had an immediate effect on the collection and the floor price saw a run up to just over 4 ETH at the start of April.

Luca promised to spread “love across the Meta” with his new team. He has been testing collaborations with spin-off projects and introducing many exciting plans for the Pudgyverse, Netz has absolutely worked his magic and delivered on his word to help the Pudgys make a comeback after all of the FUD. The community has rallied together to create a very strong NFT collection once again. This is something that Otto Suwen described as “heart-warming”. Pudgy Penguins floor price now sits at a steady and very healthy floor price of 2.59 ETH, which is impressive given the current market climate.

Today (22nd July 2022) is actually a special day for Pudgy Penguins. It marks one year of “resilience, perseverance, and community”, in other words, it’s the penguin’s birthday.

Just two days ago, the team Tweeted that “something is coming” on July 22nd. This is something that the entire community is eagerly anticipating. Could it be a birthday surprise? We’re all excited to find out.

It cannot be denied that the Pudgy Penguins year hasn’t been all rainbows and unicorns. Credit must be given where credit is due, so hats off to Luca Netz for reviving and pushing this collection to the next level. What better birthday treat is there than to go from surviving to thriving. Happy birthday, we’re all rooting for you!