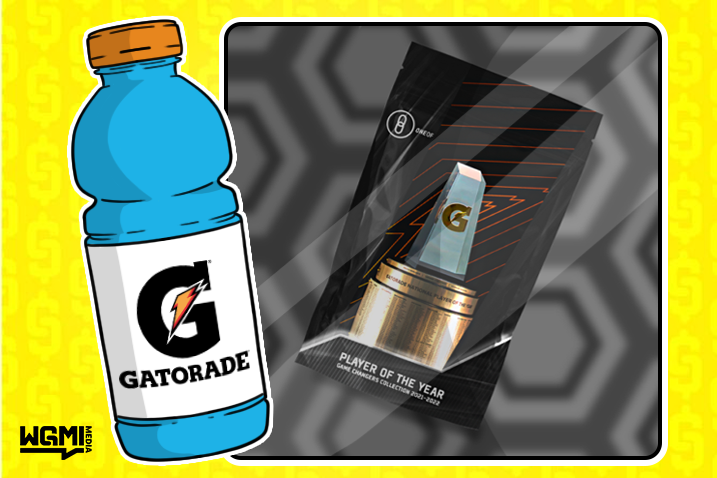 In partnership with OneOf and Vayner3, Gatorade has launched its first NFT project called “The Gatorade Game Changers: Athlete of the Year”. The collection was launched exclusively on the OneOf NFT marketplace on July 18th and is running for three days. Each pack costs just $5 (0.00336 ETH) and has no gas fees. The collection’s purpose is to help expand its Player of the Year program. It also was aimed to buffer the Athlete of the Year Ceremony which took place on July 19th, 2022.

First, What is Gatorade?

Gatorade is an American brand best known for its signature sports-themed drink. Gatorade has a healthy history and reputation for serving athletes in the sports community. It first launched its Player of the Year program in 1985, which now has awarded hundreds of athletes with college and professional championships.

What is The Gatorade NFT collection?

The Gatorade collection essentially has two parts. The first part is the Athlete of the Year pack, where initial NFTs are available as cards that come in bundle packs of 3 NFTs. These packs will consist of 3 randomly selected Player of the Year athletes.

The 12 Gatorade Players of the Year are:

The collection’s description states that “each of these athletes has overcome immense obstacles and adversity to become pillars in their community and achieved tremendous success on the field and in the classroom. From this group of 12, two will be named the Gatorade Male and Female Athlete of the Year!”

In line with Gatorades values, the second part of the collection focuses on giving back to athletes. It will be airdropping 10 NFTs to athletes’ personal wallets. The NFTs are 10 original custom edition collectibles of their personal cards.

If this isn’t enough to support the sport and athlete community, all primary sales and 8% of secondary sales from the Gatorade Game Changers NFT Collection will be going to Good Sports charity.

Gatorade is the latest Web2 brand to cross the bridge into Web3. Recently, we have seen many fail to do this successfully, such as Chris Brown and Liverpool FC. Gatorade has partnered up with Web3 natives who understand Web3 culture to do this the correct way, which will certainly increase its chances of success.