NFT Influencer Farokh has recently been accused of dumping on his followers. This alleged stunt has damaged his fragile reputation further. Here is what happened. 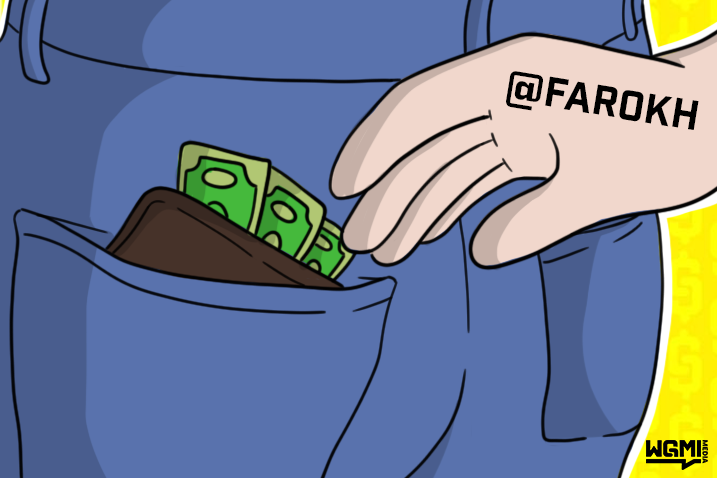 After Farokh’s alleged blessing, The Saudis NFT collection took the NFT market by storm. Currently, The Saudis collection is ranked third in the top collections over the last 24 hours section on OpenSea, and ranked second over the last seven days. It has been reported that Farokh managed to get his hands on multiple Saudis NFT tokens and made more than 30 ETH from selling them. At first, this was an acquisition, however now, there is compelling evidence against him. Let’s dive right in.

First, What Are The Saudis NFT?

The Saudis is a hyped free-to-mint collection of 5,555 2D pixelated style avatars. The art is similar to the likes of Crypto Punks and The Habibiz. Holding a Saudi token grants holders access to exclusive channels on their Discord server, as well as the “Sheikh” status in the project’s kingdom. The Saudis is the latest free-to-mint project that has enjoyed success. In the last 24 hours, it has generated 6.7k ETH in total volume, which is massively impressive given the current market climate. The floor price peaked at 2 ETH, and outliers were being traded for up to 10 ETH. Since then, there has been a correction and the floor is holding around 0.8 ETH at the time of writing.

While it isn’t clear exactly what happened, it appears that Farokh was able to mint 10 tokens when the limit was 2 per wallet for others. So what, who cares? Well, everyone does, apparently. Why? It is because Farokh is reported to have subtly shilled The Saudis through a variety of Tweets and also by liking all of its posts. By doing this, The Saudis would have gained exposure and visibility through Farokh’s community members via the Twitter algorithm.

Saying this, upon some digging, it appears that Farokh never actually directly shilled or promoted the project outright. The jury is out whether he technically did anything wrong or not, but many people on Twitter certainly think he has. What cannot be denied, is that he sold all of these NFT tokens for more than 30 ETH. This is something that many of his followers found controversial.

As you can imagine, the majority are not happy about the situation. Browsing through Twitter and it’s easy to find many people posting an opinion, as always. The general consensus is people think that he used his large Twitter following of more than 300k as exit liquidity. This is a term that is also known as a “pump and dump”. Many followers or ex-followers are either voicing their anger or demanding an explanation. This is an explanation that they are unlikely to ever get.

On the other hand, there is plenty of support for Farokh. At the end of the day, all NFT traders are here to make money. I’m unsure of what the critics expected him to do, hold bags? The real question shouldn’t be why he sold the tokens (that’s obvious), it should be refocused on why he was allocated so many Whitelist spots in the first place.

This is another classic example of the rich getting richer, and people not liking it. Whether he did anything wrong or not, I’m personally unsure. However, I could almost guarantee that 99% of people would have done the same if they were handed 10 Whitelist spots to a collection that presented a great flip opportunity.