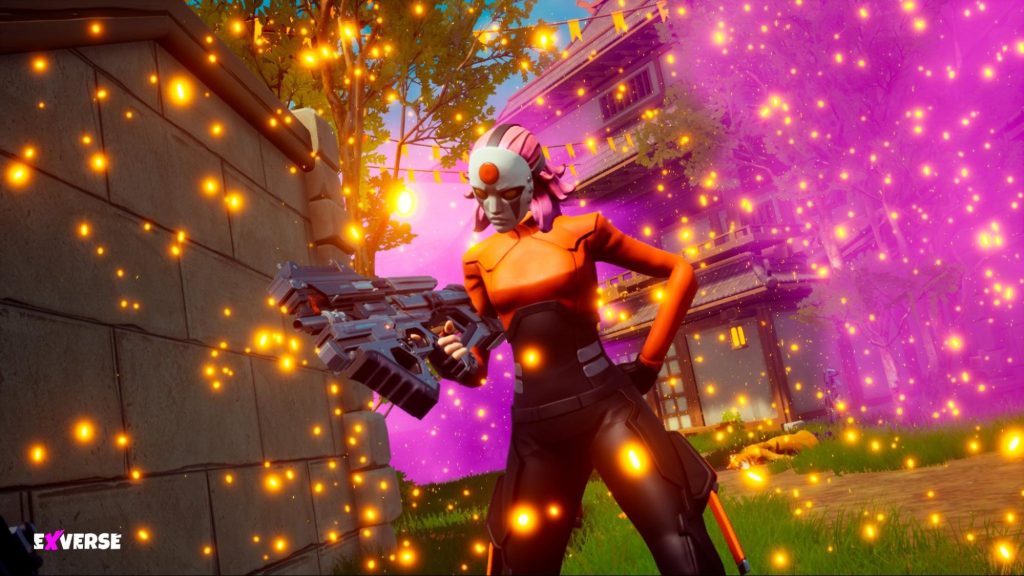 * $NEAR is a fast, scalable, carbon neutral blockchain with extremely low gas fees that has partnered with Exverse for their very first launch.

Exverse is a PC free to play multiplayer 3D third-person shooter game in the battle royale genre with play to earn (P2E) mechanics, combining competitive game modes in different worlds. Exverse combines third person shooting and combat game mechanics with a ‘last man standing’ survival game mod.  The goal for the player or team is to survive on a shrinking map against many other players or teams. During the battle, players can use a variety of unique abilities in combat. In the game, we can expect to see battles consisting of melee weapons, ranged weapons, grenades, body armor and medical aid kits. Watching the trailer below, immediately Fortnite vibes spring to mind. Fortnite by Epic Games has taken the gaming industry by storm in recent years, revolutionizing battle royal gaming as we know it. What makes Exverse innovative and unique is the blockchain technology which is implemented to create in-game weapons, characters, unique abilities and rare items as NFTs.

Story / Background (how the project came to be)

There is limited information available on Exverses story online. We reached out to the founding team and spoke to the CEO, Ooi Fei Hoong. In a WGMI exclusive interview, Ooi stated that the “team initially identified the opportunity in the space to create a P2E game that not only looks good, but is fun to play”. The team is aiming to “change the ‘play to earn’ trope to ‘play and earn’”. Ooi then explained that the focus is narrowed in on gameplay first and rewarding its players before adding in a sound tokenomics system.

The inspiration behind Exverses theme and appearance is “other popular non P2E games” in the space, as well as popular Web2 games. By doing this, they hope to attract not only NFT enthusiasts in the Web3 market, but also to bridge the P2E gap for Web2 gamers. They hope to be able to “simplify the transition from the user and experience perspective”.

Exverse is dissimilar to many other profile picture projects in the NFT market, therefore the utility is different from a typical project. Owning an Exverse token will grant holders a lifetime season pass to all downloadable content (DLC) and any in game events, as well as access to in real life events and competitions. Holders will be eligible for all rewards that arise in the future, this is including all potential airdrops.

With regards to in game benefits, early investors will receive exclusive Exverse token holders skins. Despite all of this, there will not be any gameplay advantages for token holders as the team believes in fairness as a priority.

Exverse has an extensive roadmap with many different milestones to reach. They are aiming to launch an open beta by Q4 of 2022.  Included in Exverses roadmap:

Investigating Exverses core team, it appears that they are very capable and have the ability to execute. The team consists of members who have years of experience not only in the Web3 space, but also in other relevant industries. Each member of the team has their own individual specialities and skill sets, which is a bonus. More great minds put together is better than one. Exverses core team are all gamers themselves, therefore they are working to create something that they are very passionate about.

Alexander Chernov has been a serial blockchain and crypto entrepreneur since 2014. Alex is an early adopter and has worked as a marketing strategist for several projects. He is the owner of a crypto exchange platform and has expertise in crypto p2p trading.

Nikita Uriupin is an experienced senior level global marketing and creative director with a demonstrated history and proven track record working in the NFT, blockchain, gaming and web3 industry. Exverse have stated that he is a “creative problem solver with years of experience in strategy, branding and marketing”.

Ooi Fei Hoong is a serial entrepreneur and is “considered by many in the Web3 community to be one of the upcoming project leaders on Web3, NFTs and play to earn market”. One of his specialities is recognizing trends and patterns early to help his team understand how these changes impact market and consumer behaviour.

Benjemen Wong has a lot of experience in finance, E-commerce, FinTech development, integrated logistic solutions and tokenomics designs. Ben is an enthusiastic Web3 visionary with an entrepreneurial spirit.

Evgeniy Popov is the founder / CEO of GPC, gamer, developer and chief of the largest unreal engine developers community. Evgeniy has hands-on experience working with the likes of Call of Duty and Halo.

Despite Exverse not being a very hyped up project, they have still been able to secure some solid collaborations and partnerships. A few are Metamon, Gino’s Big Town Chef, Always Be Kind and Hangout DAO. Most notably, in the WGMI exclusive interview with Ooi, he stated that “Dark Echelon was our very first collaboration where we will give their holders special in-game skins”. Further, he explained that Exverse did a collaboration style AMA “with Neo Tokyo and our music partners are Neo Tokyo holders”. These partnerships with ‘big players’ in the space certainly projects reputability to the entire NFT space. Traders and investors tend to look at project associations when researching thoroughly. This aspect can be an important aspect when deciding whether to place a bet on the team (project). Exverse has done a great job collaborating with some of the more influential names in the market thus far.

Browsing through Exverses Twitter, Discord, website, YouTube and Instagram, it appears that their marketing is conducted mainly through slow and organic methods. At present, many NFT projects implement hype and FOMO tactics to attract a wider audience via excessive giveaways or other methods. Saying this, Exverse have conducted giveaways, but they are not used them in excess. The projects they have collaborated with seem fitted to their vision. Exverses primary digital marketing strategy looks to be via dropping concept designs, sneak peaks and footage of the game. Scrolling through their Twitter and Discord, the vibrant colors, smooth and enticing gameplay is seen often. Growing steadily and organically, Exverse have gained a solid following of 31.6k on Twitter.

With regards to the community, whilst there is some anticipation, engagement and activity is not ‘flying’. Although a pleasant and relaxing vibe, messages in general chat do not suggest stimulating, genuine and engaging conversation right now, but rather the odd word or two  here and there.

Looking at how well other battle royale genre style games have been received in traditional Web2 gaming, for example Fortnite, PUBG, Apex Legends, Fall Guys and Call Of Duty: Warzone, the WGMI team speculatively believe that Exverse has the potential to do very well. The WGMI team is bullish that Exverse already has gameplay footage readily available.

Developing games using Web3 technology essentially gives more incentive for gamers to play through P2E mechanics and monetization. In Web2, players often use fiat to purchase in-game aesthetic upgrades and add ons such as skins, weapons, armor and emotes. When these purchases are made, it is impossible for the player to benefit further from the item apart from simply enjoying the appearance. In Web3, these items can be traded as NFTs on secondary market places. As a result, players can sell the item once they are finished with it and want to move on. Having verified ownership over a 1/1 rare item through an NFT is much cooler than owning something that many other players have access to. Web3, P2E, and NFT gaming could potentially revolutionize the entire gaming industry and be the future. Exverse may have the potential to be at the forefront if they are able to execute well.

The entire Web3 and NFT market is in its infancy presently. Mass adoption is yet to happen and there are few people who understand this new technology. One potential concern is that people may not be ready, or willing to learn in order to take the leap from Web2. In addition, a percentage of the launch will be in $NEAR token, some may be unfamiliar with this and steer away if they find it complicated.

The second concern is that despite there being readily available gameplay footage, Exverse is still in the early stages of their roadmap. Many things are currently based on speculation, therefore it comes down to whether the team is able to execute. Looking at their credentials, they certainly seem capable. In addition, the community activity and social media engagement doesn’t appear to be very strong at present. In a hyped project, the community usually gives off an excited impression close to mint.

The final concern is the current overall market sentiment and natural volatility in this space. Right now the NFT market is facing a challenging time, projects that have not reached ‘blue chip’ status are struggling. Many projects are failing to mint out and floor prices of existing projects are ‘bleeding’. This concern isn’t specific to Exverse, but they are certainly factors to consider. The WGMI team is excited to see Exverse roll out.