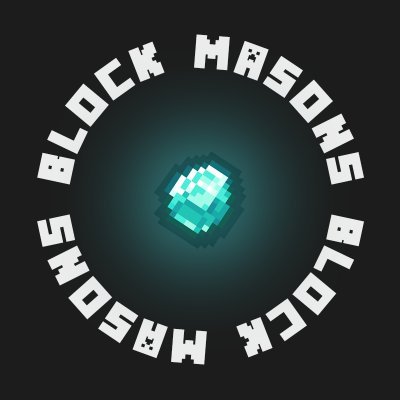 What is Block Masons?

Block Masons is an NFT faction-based Web3 MMORPG game built on Minecraft, the hugely popular sandbox video game. Block Mason is a tight knit group of gamers and builders who are excited to be witnessing the evolution of gaming. They are creating a game with provable digital ownership, decentralized autonomous organizations, and deeply engaged communities. In the game, players will be able to:

Block Mason’s ambition is to capture the core mechanics and gameplay loops that make Minecraft so fun to play, and intersect them with experimental ownership and utility using blockchain technology, such as NFTs and cryptocurrency.

The Block Mason team are crypto and NFT veterans that are serious about exploring how true digital ownership can shape the future of gaming. While they love the potential that NFTs have, they are disappointed in the direction that things are going in this space. The team claims “they are not here to make a quick buck” – they are here to pour their time and effort into a serious project and see what they can achieve over the next few years.

The actual game itself is inspired by popular Web3 MMORPG games such as World of Warcraft and Runescape. The team have taken large amounts of inspiration from Crypto Raiders and Cryptovoxels – two projects with incredible teams consistently putting in the work and effort to create ambitious and innovative projects.

Each Block Mason NFT will give the holder access to their Minecraft servers, as well as private in-game islands and the ability to mine Ruby ore which gives the recipient $RUBY. In addition, each NFT is randomly assigned a hand designed medieval skin which is displayed in-game which will dictate the players allegiance, their friends and their foes.

By utilizing $RUBY, players can purchase plots of land in-game which are NFTs themselves, giving players the ability to build and mine there too. These NFTs can be freely traded, bought and sold. Players can also use $RUBY to form guilds and trade on a Web3 in-game marketplace.

The Block Masons world consists of various islands to explore, these are:

Block Masons has an extensive roadmap, it consists of:

Initially they are launching Block Masons to a small group of players so that they can test the scalability and mechanics of the game in a safe environment.

The features that they release during the Alpha will be limited, and they’ll be carefully watching and listening to the community to gather as much feedback as possible.

When they have had a chance to test the core mechanics of Blockmasons during the Alpha period, they’ll then proceed to release another wave of features.

With the arrival of the Beta, they’ll be looking to increase the player count of Blockmasons by double, releasing 4,000 Gen 2 Blockmasons.

At this stage, the game will have gone through ample rounds of testing, both in terms of scalability, security and gameplay mechanics.

Once the team feels that they are confident, they will release a raft of important features.

Block Mason’s core team is made up of five team members and three marketing advisors. On their website they claim to be “a loveable bunch of misfits and tinkerers”.

Charlie Coppinger is the founder of Block Mason. He is a crypto veteran with lots of startup, design and marketing experience. Rumor is he even has a HODL tattoo. Charlie is fully doxxed on LinkedIn, Twitch and Twitter.

Threecreepio is a prodigal old school developer, with a penchant for retro gaming and staying one step ahead. He is fully doxxed on LinkedIn and also has a small Twitter account.

Block Masons Minecraft developer goes by the name of XL muffin. He/she is a software engineer by trade and a Minecraft aficionada by choice. XL muffin is not doxxed and does not have any links to social media available.

Omar is a talented marketer, long time Minecraft player and expert builder. His skills in marketing are only topped by his ability to create beautiful structures in Minecraft. Omar is doxxed via LinkedIn and also has a small Twitter account.

VendableFall is a “DevOps-gun-turned-NFT-Wizard”. Due to her high levels of experience in the NFT space, she is ensuring that everything stays on track.

It is unclear whether Block Masons are doing this intentionally to not build false hype or use FOMO tactics. Many projects these days spam excessive whitelist giveaways to increase their following. As Block Masons are a more unique, innovative and complex ecosystem than the average profile picture project, perhaps many have been unable to grasp the concept and are unwilling to collaborate.

Block Masons have not taken the collaboration route of marketing as many other projects do presently. Block Masons appear to be mainly utilizing leaked footage of gameplay or releasing sneak peeks of their development on Twitter. There are pros and cons to this. A pro is that Block Masons will only attract people who have genuine interest in the project, not those who are following the hype train. A con to this method is, it may be difficult to gain exposure to reach a wider audience.

More recently, Block Masons has recruited a well known ‘player’ in the Web3 space, CryptoGorilla. Crypto Gorilla boasts 223.4k followers on Twitter and is a marketing advisor for them. Block Masons may be able to leverage Crypto Gorillas outreach in their upcoming marketing strategy.

Looking at how well Web2 MMORPG games such as Runescape and World of Warcraft have performed over many years, speculatively, there is no reason why Block Masons would not expect to be successful. The WGMI team feel that if the market is ready and there is a wide enough audience looking for this genre of Web3 game, Block Masons could do well.

Developing games using Web3 technology essentially gives more incentive for gamers to play through P2E mechanics and monetization. In Web2, players often use fiat to purchase in-game aesthetic upgrades and add ons such as skins, weapons, armor and emotes. When these purchases are made, it is impossible for the player to benefit further from the item apart from simply enjoying the appearance and its status. In Web3, these items can be traded as NFTs on secondary market places. As a result, players can sell the item once they are finished with it, maybe even for a profit. Having verified ownership over a 1/1 rare item through an NFT is much cooler than owning something that many other players have access to. Web3, P2E, and NFT gaming could potentially revolutionize the entire gaming industry. If executed properly and well received by the gaming community, Block Masons could lead the charge.

The entire Web3 and NFT market is in its infancy. Mass adoption is yet to happen and there are few people who understand this new technology. One potential concern is that people may not be ready, or willing to learn in order to take the leap from Web2. The whole Block Mason ecosystem is more complicated than existing Web2 games and also other NFT projects. There are many different elements to the game, a potential concern is that if people do not understand it, they may avoid it. When something new is introduced, it is almost impossible to predict how the market will receive it. After all, a project’s value is decided by market and community consensus.

Block Mason have been live on Twitter for months now, yet they have only gained just over 2,000 followers on Twitter. Their Discord seems quiet, which suggests that not many people are excited for the project. In addition, the current market condition presents its own challenge.

BREAKING: Yuga labs has filed a lawsuit against the responsible parties behind the recent “slanderous claims” towar… https://t.co/LHpODgXvxK

We live in a society https://t.co/OvfUZ22X8Z

Are free mints still the meta