5 Brands/Celebrities Whose NFT Projects Would Sell Out Instantly

We’ve seen it already, celebrities and brands enter the NFT space with their very own projects to great success, but there’s still some mega players out there that have yet to take the leap. Let’s go over 5 brands and celebrities whose projects would sell out instantly. 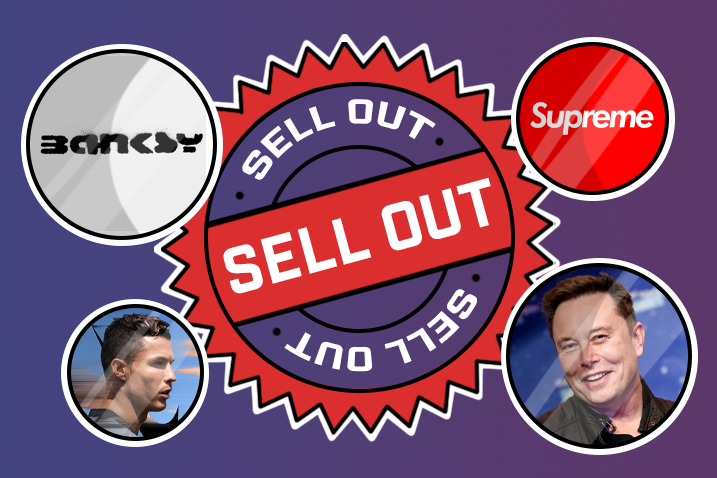 Gary Vee, Snoop Dogg, Steve Aoki, Johnny Depp, and of course, we cannot forget Paris Hilton. These are just a few of the famous names we’ve seen enter the NFT space alongside brands such as Adidas, Nike, and even Marvel. Everyone and their mother wants a piece of the pie which is no surprise given that Steve Aoki admitted himself that he made more money with his NFT drop last year than he did in his previous 10 years in the music industry.

We are deep in a bear market at the moment, and the number of projects on the horizon isn’t what it used to be. With the majority of drops flopping on arrival, it makes sense that founders and teams are waiting for an upturn in the space before launching. Despite this, we still see a rare success story, with projects reaching the promised land of ‘blue chip’ status and disrupting the usual big boys on the OpenSea rankings.

On the topic, it must be noted that many celebrity NFT projects previously launched with a ton of hype and they reached great heights. However, once the hype passed. The projects didn’t perform well. The brand and celebrities in this article are carefully hand-selected as I believe they would have sustainable ‘blue chip’ potential. If we combine the pure and meteoric clout of the following 5 brands and celebrities, there’s little to no doubt that they would sell out instantaneously.

This is obvious, right? Perhaps the most famous living artist in the world right now. A collection from Banksy would be worth disgusting amounts. This UK-based artist is the pure definition of hype and yet, we still do not know his true identity. His street art is iconic, whilst his canvas art goes for millions at auction. His work “Love is in the Bin” sold for a cool $22.75 million in 2018.

Art is a truly appreciating asset as it is, and when combined with NFTs, the collectors go wild as we saw with Beeple’s “The First 5000 Days” going for $69 million, being the most expensive NFT at the time. Banksy knows how to disrupt an industry, and I do predict at some point, we will see a collection of his. You better be ready, as it will be an absolute juggernaut.

Sorry my American friends, but Cristiano Ronaldo edges out LeBron James as the most famous athlete in the world, which is no huge surprise given that Football (errm Soccer) is the most followed sport globally. The 37-year-old machine has been a dominant force on the field for almost 2 decades now. He already has his fingers in many pies, including the fashion world and fragrances. Everything he touches turns to gold, which is why he is able to command a reported $1.6 million per sponsored post across social channels. No surprise, given he’s the most followed account on Instagram with over 453 million followers.

An NFT drop from CR7 could consist of animated versions of his best moments throughout his decorated career. Whatever a collection of his would consist of, it would be swept up without a second thought.

So you think Gary Vee is a successful entrepreneur? Well, he is, and has a reported net worth of $200 million, which isn’t bad. However, Grant Cardone edges Gary ever so slightly with an estimated net worth of $2.6 billion. If you somehow weren’t aware of who Cardone is, he’s a self-made billionaire who’s a master salesperson, marketer, motivational speaker, educator, and real estate mogul.

Whilst he’s not quite as prolific in terms of internet presence as the likes of Gary, he is still an extremely influential figure. With the success of educational, wealth-building communities within the NFT space, such as the recently minted Gents Croquet Club from the future billionaire, Iman Gadzhi. A collection from Mr. Cardone himself, who could potentially offer more value due to his additional life experience, would be incredibly valuable to you up-and-coming wealth chasers.

The living legend, Elon Musk, has enough money to buy every single NFT in circulation and cure world hunger at the same time, due to a net worth of more than $220 billion. Elon has been at the forefront of cryptocurrency and blockchain technologies for years now, which means that he will have surely been paying close attention to the NFT space.

CEO of Tesla, as well as SpaceX, Elon, and his ventures have always led the way with cutting-edge technologies. An NFT project from the man himself would likely cause the internet to fall to its knees, given the countless utilities and benefits this genius would likely think of.

In most cases, the roadmap of a project follows a certain format now: The Metaverse, staking, alpha, IRL events, apparel, etc. I believe that, when Elon ultimately decides to launch his own collection, we’ll bear witness to never before seen features and with that, will come to a clamoring to own one of his tokens.

Speaking of apparel, Supreme is often considered, the top dog in the streetwear niche. While high-end fashion houses such as Louis Vuitton dominate when it comes to revenue and net worth, Supreme can be looked at as a far more suitable brand for the NFT and Web3 space.

NFTs and apparel already go hand in hand, and with Supreme being no stranger to limited edition drops, this merger just makes too much sense. Token holders could gain access to exclusive items and discounts across future clothing drops adding real value for individuals who are fans of the brand.

Nike has already seen great success with its own NFTs, so it wouldn’t be a surprise to see other brands follow suit. As a clothing brand, Supreme has mastered the art of demand, therefore, as an NFT collection, it would be exactly the same.

This list is of course, highly subjective and based on my own opinions. Truth be told there are hundreds, if not thousands of individuals and brands that I could have included. It does evidence, however, the exciting potential of the NFT space when we consider just how few globally recognised entities are yet to take the plunge.

As awareness grows and the space becomes mainstream, it wouldn’t be a surprise to see more or less every well established brand launch its own collection. What did you think of this list then? Do you agree and if not, who would you have included? As always, thanks for reading, and good luck on your ventures.