3 Reasons Why Goblintown Is Mooning

Goblintown NFTs were free to mint, and are now sitting pretty at a 6.5 ETH floor price. Here are the 3 reasons why goblintown mooned (and 3 lessons on what to look for in a successful NFT project). 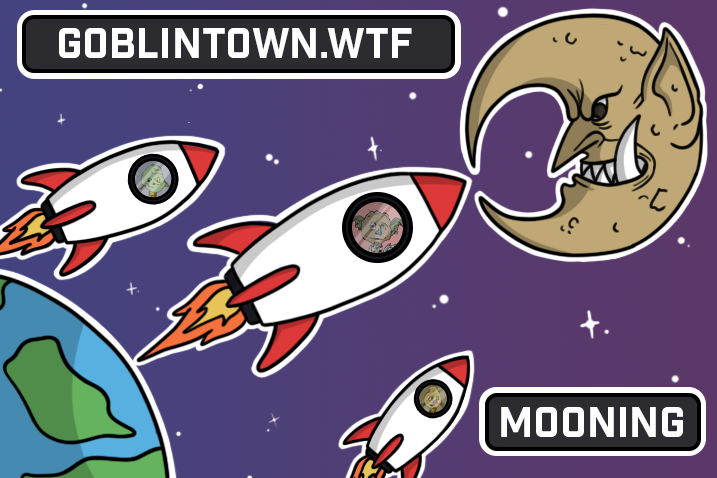 This bear market has laid waste to some of the most hyped and heavy-hitting NFT projects in the space. While many established projects are watching their floor prices plunge, most new projects are struggling to sell out their entire collections.

There are exceptionally few exceptions to this bearish trend. One burning outlier is, of course, goblintown. It’s ugly. It’s barbaric. It’s mooning. This collection of 9,999 goblin NFTs were free to mint 12 days ago, and are now sitting pretty at a 6.5 ETH floor price (at the time of writing).

Goblintown.wtf has no roadmap, no obvious utility, no Discord, and an undoxxed team. Yet it has performed better than almost any other NFT project since its launch.

What does goblintown’s rise to prominence reveal about the NFT space? And what has this hullabaloo taught us about what to look for in a project, so we can identify the next big winners?

I read every single one of the 2,661 Tweets from goblintown.wtf to understand exactly wtf is happening. Here are the three reasons why goblintown mooned (and three lessons on what to look for to identify the next big project).

Reason 1: A big “fuck you” from the degens

This, for me, is the most important reason.

With every crypto bull market, the space introduces more and more retail and professional investors. In 2021, institutional investors traded $1.14 trillion worth of cryptocurrencies on Coinbase, up from only $120 billion the year before. This growth is a direct reflection on the rapid mainstreaming of cryptocurrencies and NFTs over the past years.

But long before the venture capitalists and side-hustlers entered the space, the degens roamed cryptoland and thrived. A new shitcoin was being created everyday, but only one currency was king – vibes.

As the mainstream audiences poured in, the degens became a mere minority in the world they had helped to create. The vibes they knew and loved were being commercialized. Collectors increasingly found themselves surrounded by bots farming for whitelist spots. The most prominent projects were being monopolized through multi-million dollar deals, funded by the same corporate cats the crypto space was trying to fight against.

And then the bears arrived. War. Inflation. Lockdowns. LUNA. OpenSea daily trading volume stalled to a snail’s pace. As the hype fades away from the space, so too do the profiteers and people looking to make a quick flip. What remains, however, are the degens that have been here since the very beginning.

As the profiteers fled in fear, the degens inspired one of the mightiest pumps we have seen this year. It is the perfect “fuck you” to all the flimsy investors that tapped out at the first sniff of blood. And what better way to say “fuck you”, than to do it with a project that breaks all the rules.

A project that understands its audience and can capture the zeitgeist will thrive.

Reason 2: Impeccable art and branding (the return of the vibes)

Whether they like it or not, the degens can’t deny they are a fool for impressive art, original concepts, consistent branding and professional-level execution. Goblintown has each of these qualities in heaps.

It is extremely difficult to make something “ugly” look good. Especially in a Disney-brainwashed culture where soft and child-like features are the ideal. Even more so in a space where most high-profile PFP projects are made up of cute and colorful cartoons.

The goblins from goblintown are grotesque, hairy and disfigured – yet they are somehow adorable (that might just be the 6+ ETH floor talking). The earth tone color pallet and playful traits are incredibly unique, and give each of the goblins their own character and personality. To pull that off requires humor, art knowledge and consistency. The artist was certainly no schmuck.

One of the trademark marketing ploys from goblintown have been their notorious Twitter Spaces. To the custom goblintown soundtrack, goblins gather in a Twitter Space and role play as goblins. For hours. I can’t think of anything that embodies degeneration more succinctly.

During a bleak market downturn, goblintown was supplying the vibes by giving people something to enjoy. People were bored – making strange noises with others is simply something to do.

Although this could easily be dismissed as light entertainment, I think there’s more to it.

Twitter Spaces had become dominated by desperate founders preaching about tokenomics, metaverses, roadmaps and utility. To many people, the gargles, gobbledygook and GaAaARY PEeaA SaaUcCE make infinitely more sense than the discussions we had become accustomed to.

The goblintown branding is consistent on every level of its execution, even down to the finer details. For example, Goblin speech is even used for the collection’s traits – “STANKFINDER” is a nose, and a goblin wearing a fast-food servers hat has the “TAK UR ORDRR?” trait.

The professionally-finished website furthers their antagonistic branding. While the site loads, visitors are told to “hold on dammit”, and the button that leads through to the main page demands “Fucking enter already”. It’s fun.

This consistency across all of the project’s communications invites us to imagine a much larger and richer world of goblins, with a lot more yet to be discovered.

Drip-feeding information and leaving the audience wanting more is a common strategy used by many of the major NFT projects.

Speculation as to what a Koda might be has inspired sales for plots of land in the Otherside metaverse north of 300 ETH. The mystery keeps fans engaged as they theorize on what it could all mean, and hold onto their bags dearly as they await the next announcement.

Goblintown has deployed this tactic expertly.

An ongoing and constantly developing mystery in the goblintown universe is the “mistryuss eggie”. There were five mysterious eggs in the collection. The artwork for these egg NFTs changes as the story behind it unravels.

These visual riddles, sprinkled with humor and tension, have fuelled intense discussion about the fate of these five NFTs. People have made offers of over 34 ETH for these NFTs at the time of writing, and they aren’t being accepted.

Equally as mysterious as the lore is the team who designed this entire universe. Goblintown has very gradually drip-fed details of who the team is, yet their identities and experience remain completely unknown.

Commonly seen as a ‘red flag’, their fully undoxxed team has worked in their favor. Whoever they are, this is certainly not their first rodeo. The smart contract is sound, the mint launched without a hitch, and the branding has been exceptional. Concealing the team’s identities has only contributed to speculation about who is behind this project. There are even rumors circulating that it might be associated with Yuga Labs or Snoop.

In a similar vein, the project’s decision to avoid revealing any roadmap or utility has equally benefited the project’s hype. Despite the absence of a roadmap, there is a clear sentiment amongst fans that this project is leading to something bigger and better.

In essence, goblintown managed to capture the mood. It is a welcome distraction that gives people something to be excited about at a time when nothing exciting is happening.

While many of the degen plays we have seen in this space have been mindless derivatives, goblintown has set a new standard. It is the peak degen play.