Minecraft recently announced that they would be banning NFTs. This has majorly negatively impacted 3 NFT projects. Here’s what you need to know. 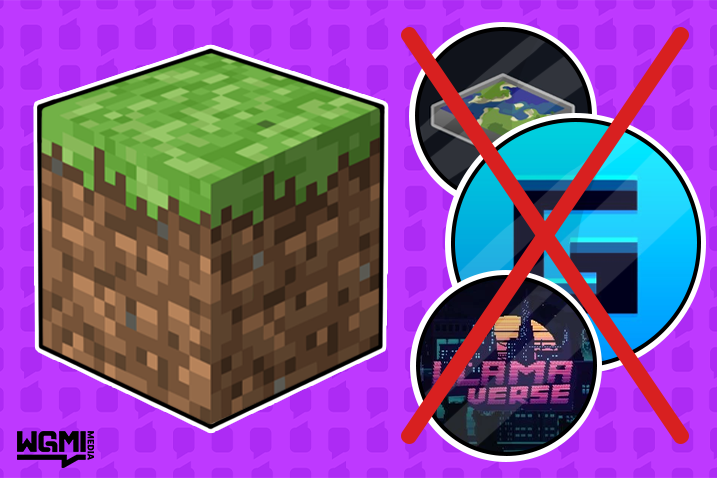 If you’re unaware by now, Minecraft recently released a blog post where it rejected NFTs and what they represent. Minecraft, the most successful video game and virtual world in history, was a big target for NFT racketeering. However, it has been decided that NFTs have no place in the future.

The blog post explained that “Integrations of NFTs within Minecraft are generally not something we will support or allow. It then adds, “blockchain technologies are not permitted to be integrated inside our Minecraft client and server applications, nor may they be utilized to create NFTs associated with any in-game content, including worlds, skins, persona items, or other mods.”

This has been bad news for specific NFT projects, especially NFT Worlds, Llamascape, and Gridcraft. Each of these projects previously had been built on the Minecraft ecosystem and had a use case for the game. For example, NFT Worlds sold Minecraft seeds, the codes used to generate the worlds we play within, as NFTs. NFT Words had generated more than $75 million in transaction volume, but the token value has dropped by more than 70% since the announcement.

NFT Worlds is a fully decentralized, fully customizable, community-driven, play-to-earn gaming platform where world owners can create limitless metaverse games or experiences for players or exclusive communities within their worlds.

Using Minecraft and its sprawling open-source ecosystem, NFT Worlds builds on the backbone of decades worth of open source development within the Minecraft community and radically expands on it to enable entirely new type of 3D voxel-based, decentralized gaming

Since NFT World was built entirely on the Minecraft ecosystem, it has taken a massive hit. Before the news was announced, NFT worlds sat at a consistent and healthy floor price around the 3 ETH range. Only a couple hours after the announcement, the floor price dropped to a low point of 0.71 ETH. This attracted a wave of sales activity which has seen the floor price recover to 1.38 ETH at the time of writing. The announcement also saw NFT World’s native token, $WRLD, ‘fall off a cliff as seen in the image below.

How Did NFT World React?

Shortly after this catastrophe, NFT World’s team took to Discord and Twitter to update their community. The latest Discord announcement reads “this out of nowhere announced by Microsoft/Minecraft to outright ban all possible uses of NFTs & blockchain tech within Minecraft feels like a step backward in innovation and may even have painful downstream effects for them in the long run – we’ll see how that plays out”. The post then goes on to explain that the team is working internally and “have all hands on deck brainstorming solutions” regarding the changes. Will NFT Worlds be able to recover? It’s impossible to say. However, the team is very innovative and capable, so I’d say that it’s likely, but only time will tell.

Founded by NFT influencer, NFT Llama, Llamascape is a play and earn metaverse platform and gaming studio which has merged with Gridcraft. Gridcraft is an established play and earn gaming metaverse platform for PC, Xbox, PlayStation, Nintendo Switch, and mobile devices that have been active since 2019. Gridcraft is produced by Gridcraft Studios, a game studio made up of game developers, level designers, and 3D modelers with an extensive collective resume in both multiplayer game creation and NFTs.

The team’s mission “is to use their deep experience with game design and operation to create actually fun and engaging content to introduce and make positive to players the concept of web3 gaming and play and earn.”

Gridcraft’s website states that its “Network is compatible on Minecraft, the popular multiplayer game platform, and developed by Gridcraft Studios. As of now, we have no affiliation with Mojang or Microsoft.”

SImilarly to NFT Worlds, both of these projects have taken a massive hit in terms of price following the announcement. Just a couple of days ago, Gridcraft sat at a healthy floor price where sales transactions were being recorded between 0.28 – 0.4 ETH. A few hours after the news, Gridcraft dropped to an all-time low of 0.06 ETH. Again, this attracted an influx of sales volume which has increased the floor price to 0.18 ETH at the time of writing.

At the start of the month, Llamascape was fluctuating between 0.2 – 0.35 ETH. As we moved through July, the price trajectory was trending downwards overall, however, when the news was announced, we witnessed a dip down to an all-time low of 0.05 ETH. Yet again, the discounted price has attracted a wave of sales activity. The floor price has now recovered and it sits at 0.11 ETH at the time of writing.

In typical NFT Llama fashion, he Tweeted that the duo “continue to build out the ecosystem.” He added that “it’s very bullish” and “we move forwards.” He claims they are building an “amazing metaverse platform,” suggesting that the fiasco is no major cause for concern and may be a minor bump in the road.

Whether this is a good or bad decision from Minecraft is up for debate. Many have taken to Twitter to express their opinions, as always. The general consensus is that NFT enthusiasts think this is a terrible idea, whereas anti-NFT extremists love it.

What cannot be denied is that  Minecraft is clueless about NFTs. Under the “WHAT IS AN NFT” section in the blog post, the Minecraft writer states “An NFT is a unique, non-editable, digital token that is part of a blockchain and often purchased with cryptocurrencies like Bitcoin”. Anyone who knows anything about Web3, Crypto and blockchain technology knows that this statement is garbage.

Moving forwards, this event provides an opportunity for other establishments to pivot into the NFT space. Earlier today, the CEO of Epic Games, creators of Fortnite, stated that they “definitely won’t” follow Mincraft’s lead and ban NFTs. This is super bullish and just shows how early we are. We’re still going to make it!