NFT.NYC is here, one of the biggest NFT events on the planet. With so much to see and do, it’s easy to get lost amongst the enormous amounts of choice, so let us take the stress away and suggest 10 NFT.NYC events that you cannot miss. 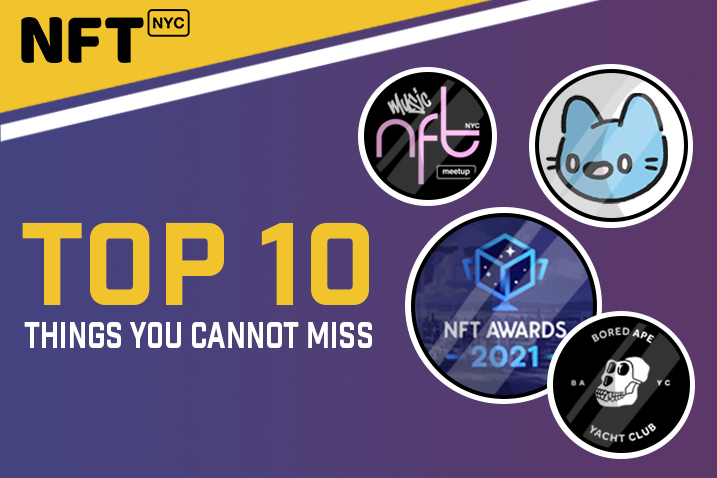 NFT.NYC 2022, now in its fourth edition, will see The Big Apple taken over by all things NFT for 4 days. Since its initial event back in 2018, NFT.NYC has seen its attendance grow by the thousands, with up to 15,000 people expected to attend. This is an increase of 5,600 since last year, evidencing the growth of the space. This year’s event is looking to be the best yet with over 1,500 speakers lined up. Many sectors from the space will be represented, including the likes of brands, developers, artists, entrepreneurs, gamers and collectors. In addition to the exclusive NFT community events, art galleries, tournaments, parties and panels, there will be many things to see and do at NFT.NYC 2022.

With so many events planned for the week, finding the right ones can be overwhelming. So with that in mind, here’s my roadmap of 10 things you simply cannot miss at NFT.NYC 2022.

Taking place at Pier 17 from June 20th to June 23rd, this exclusive event held for BAYC and MAYC holders is without a doubt unmissable if you are lucky enough to own a token. While details on what can be expected over the 4 day period are still withheld, given the magnitude of famous BAYC holders and entertainers in the NFT space, we’re surely in for a treat. An open bar has been promised, as well as free food before, during and after the event, meaning the party will be long and you’ll be kept well fed to ensure you don’t pass out from hunger! Exclusive Merch will also be available to mark your time at the event.

On June 20th, NFT.NYC will host the 2nd Annual NFT Awards ceremony in partnership with OpenSea, APENFT and NFT.Kred. Awards are presented to the top NFT leaders, projects, and companies in various categories, including gaming, marketplaces, news coverage, and more. Standout winners from last year included the likes of The Sandbox, Bored Ape Yacht Club, VeeFriends and Tyler Hobbs. This year’s event promises to be a huge celebration of the NFT space over the last 12 months after receiving more than 18,000 votes from the community.

For the music lovers out there, which is more or less everyone, Music NFT meetup was created to be the leading gathering space for the best minds in the NFT and Web3 space. Taking place on June 20th, starting at 5pm, we’ll be treated to speaker panels and live performances from the likes of Ashanti, Cyn Santana and Nick Merich. Additional information can be viewed on the website, where tickets can also be purchased.

‘Blue Chip’ NFT project, Cool Cats will be hosting their IRL Cooltopia event at NFT.NYC 2022, starting on June 21st and running until June 23rd. Taking place at Center415, the event will showcase a fully immersive version of its Cooltopia game. Open to both Cool Cats holders and non, this event is available to all at no cost, although a holder only party will complete the celebrations. Furthermore, Cool Cat holders will have the chance to buy a spot on dynamic posters that will be projected on buildings all over the city using the project’s currency, $MILK. Cool Cats Cooltopia is lining up to be an amazing event for all.

A 3 day event starting on June 21st. Kicking things off with the world premier of a Doodles product trailer, this event is promising to be a real joy filled time that will include a pop up shop and community led events. While open to the public, Doodle and Dooplicator holders will enjoy holder only benefits over the 3 days including queue skips, extended holder experiences and access to a “Holder HQ”.

Prominent crypto-artist FVCKRENDER will be bringing the metaverse and the real world together with the physical activation of his LVCIDIA project. FVCKRENDER will show off his generative NFT collection, FVCK_AVATAR, as part of LVCIDIA as a virtual gallery for three days. Along with Steve Aoki’s A0K1VERSE, the event will include performances from TOKiMONSTA, The Holy and Steve Aoki himself. LVCIDIA is due to run from June 21st – 23rd at Studio 525.

On June 20th at 10pm, The NFT Guild and Redpill VR will be teaming up to showcase Web3Fest – a mixed reality experience part of the Dented Feels NYC Vacation. Redpill VR’s mission is to create the most innovative VR experiences. Web3Fest, hosted by Paolo Moreno, is aiming to present the best VR experiences currently in the space. DJ, Georgia Sinclair and her metaverse avatar will perform a fully immersive live set at the event. Her artwork will be presented from Dented Feels, SuperNormal, and others.

Edible NFT Food Hunt is a citywide food hunting mobile app debuting at NFT.NYC in the form of a citywide “eat to earn” competition. Using the app, players will be able to collect ‘Edible’ NFTs across NYC for points and prizes. You certainly won’t go hungry if you get involved with the hunt as it has partnered with some leading restaurants in the city. By participating, you can simply chow down on some delicious food and claim your free NFT. These tokens can then be exchanged for amazing prizes!

The brains behind Zora Protocol are bringing yoga, brunch, music and art performances to NFT.NYC 2022. Starting on June 21st, the event will span 3 days and will include panels on building new tools for new mindsets, the future of Web3 and diversity. Zoratopia’s main event launches on day 3, with performances, exhibitions and free merch promised. Full details on the event can be found here.

Of course, we couldn’t make a list of unmissable things to do at NFT.NYC 2022 without including the guest speakers that are due to attend. Arm yourself with your learning brains and listen closely as the experts will be covering the current state of the NFT ecosystem. In addition, they will be exploring wider subjects from the spate of amazing blockchain technologies that have been appearing, and will likely show up in the future.

Unfortunately, due to the lack of ability to time travel, it will be impossible to catch every speaker as conferences will be hosted across various venues. Regardless of who you choose to see, I would strongly suggest you try and catch at least a few, as these are highly influential figures in the NFT space and their knowledge is no doubt invaluable. A full program can be viewed here.

So there we have it, 10 things you simply cannot miss during NFT.NYC 2022. Are you lucky enough to be attending this year’s event and if so, will you be taking this advice on board? This is a hugely exciting time for the NFT space and despite being knee deep in this bear market, this event only goes to show the strength of the community and the growth we will continue to see in this space.